A long, hard look back at Prattsville's darkest hour 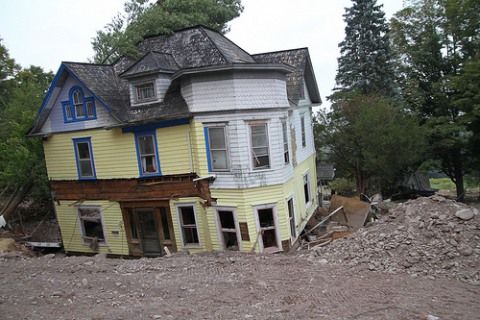 Above: The house of Dave Rikard, a week after the Irene floods devastated Prattsville's Main Street. Rikard appears in a New York Magazine feature story this month about Prattsville. Photo by Jay Harsevoort; shared in the Watershed Post's Flickr group pool.

For anyone who lived through the Irene and Lee floods last year, a feature story in the current issue of New York Magazine will be a very tough read. "Please God Stop The Rain," a 5,000-word story by feature writer Josh Dean, is an astonishing look back at the day Prattsville washed away.

In it, Dean recounts the experiences of several Main Street residents -- all of whom have appeared in news accounts of the flood before, but whose terrifying ordeal on August 28 has not yet been told in such vivid and heart-stopping detail.

Here's a snippet about Pam Young, who spent between six and eight hours trapped on the roof of her disintegrating house with her 9-year-old son Joey, his 9-year-old cousin Riley, and her two dogs:

When the boys began to scream awful things like “I don’t want to die!,” Pam tried to distract them with song (“Rain, rain, go away”) and then prayer (“Please, God, stop the rain”). Even the dogs were quivering, and they stuck close to the boys when Pam went back inside the house to call her daughter’s boyfriend and—because she refused to break down in front of the children—to cry. It had been a terrible year already. She had been diagnosed with breast cancer and had only recently finished her final chemotherapy treatment. She was weak, physically and emotionally. When it dawned on her that she had some Valium in her purse, she took one.

Pam called 911 to ask when a boat was coming and was told that the first one had been dispatched. It never arrived. She later learned it had capsized, tossing its rescuers overboard. When she called back, she asked what she should use as a flotation device if she had to do the unthinkable and jump into the raging waters. The man replied that he would have someone call her back with an answer. No one ever did.

Before her phone finally died, well into the afternoon, Pam Young posted a message on Facebook: “Somebody please save us.”

A year after the floods, Prattsville is picking itself up again, and most of the people profiled in Dean's story are still in town. Here, members of another (unrelated) Young family, who own Young's General Store in Prattsville and survived their own hellish rooftop nightmare on the day of the flood, echo a sentiment heard around the region in the aftermath of Irene, even from people who lost everything: We were lucky.

Peggy Young and her husband have agreed to borrow $500,000 to rebuild the store that had been paid off for decades, but she’s feeling happier than she’s been in years. As her son Brian told her, If you think you’re going to die and you end up living, even if you lose everything around you, you still feel like the luckiest person on Earth.