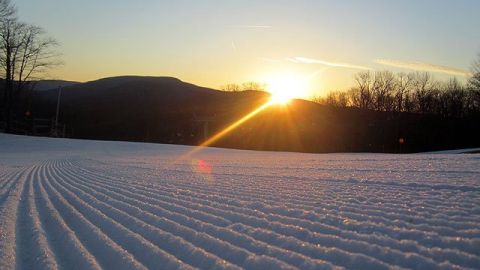 Above: Sunrise over Belleayre this morning. Photo from Belleayre Mountain's Facebook page.

Not included in the New York State Assembly's 2012 budget proposal: Money for ORDA to take over the management of the Belleayre Ski Center, currently operated by DEC.

The Assembly has not yet passed its budget, but a press release from Assemblyman Kevin Cahill, who represents most of Ulster County and Rhinebeck in Dutchess County, claims that the budget proposal rejects the Belleayre transfer.

Cahill is quoted in the release:

The issue at Belleayre is funding, not administration. Putting it in an under-funded regional authority with little or no connection to the Catskills does nothing to assure the Ski Center will receive the resources it needs to thrive.

That's not the only big difference between the Assembly budget and Gov. Andrew Cuomo's, which was released in January. The Daily News reports today that Assembly Democrats are on track to reject many of Cuomo's proposed budgetary reforms. A few of the big differences:

A 21-page memo on the Assembly plan obtained by the News flatly rejects Cuomo’s “Tier 6” proposal. It does not offer any alternatives.

The plan also would axe Cuomo’s call to expand the state DNA database to include samples from those convicted of any crime, including all misdemeanors.

In addition, the Assembly Dems are opposing the governor’s push to remove the power of the state controller to pre-audit all state contracts as well Cuomo’s call to merge several agencies, including the Racing and Wagering Board with the Division of Lottery.

The Assembly is scheduled to take up a budget resolution on Monday, March 12.

The final state budget is due April 1 -- though Albany has a habit of blowing that deadline. That leaves plenty of time for legislative wrangling and dealmaking over issues like ORDA's Belleayre takeover.