Whiskey in the jar: Delaware Phoenix develops a new line of spirits 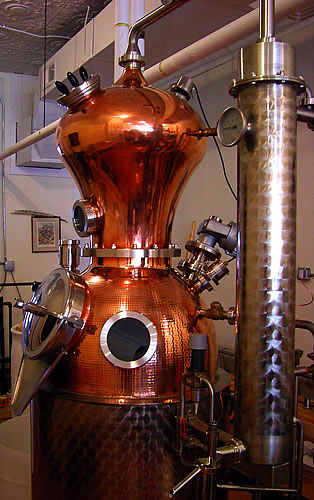 The Delaware Phoenix stillA local artisanal distillery known for its herb-infused absinthes is branching out into whiskey. Cheryl Lins, owner of Delaware Phoenix Distillery located at 144 Delaware Street in Walton, is set to release three new products at the end of August.

New to the Delaware Phoenix label are Rye Whiskey, Bourbon Whiskey and Aged Corn Whiskey. Lins says she has a particular interest in whiskey.

“It was our first Native American spirit,” she says. “Between 1797 and 1830 there were three small farm distilleries in the Town of Walton. They made two types of whiskey; rye and wheat. Those were the grains that grew well in this area at the time. Corn did not. Corn grows well in Kentucky.”

Lins explains that whiskey was an integral part of the early homesteading farm. At the time, whiskey was viewed to be medicinal. In preparing their “medicine,” farmers had to find a means to dispose of the spent grains left over from the distilling process. Thrifty farmers quickly discovered that their farm animals, especially pigs, made quick use of the grains as feed. Nothing was wasted.

Spent grains have had most of their sugars removed. The sugars are converted to alcohol through fermentation, in order to make the spirit. Once the sugars have been converted, the leftover grains are high in protein and low in carbohydrates, making them a great supplement feed for livestock.

“I knew I didn’t have the storage for spent grains, and I needed to get rid of it,” said Lins. “This is my way of giving back to the community, creating a cycle.”

The spent “mash” has a low pH and can only be stored for a short time. Lins has created a list of area of farmers to whom she offers the spent grains for free. The farmers just have to make arrangements for pick-up from the distillery. Big producers, like Jack Daniels, sell their grains to feed brands like Purina -- which, Lins says, is part of why mass-produced whiskeys are less expensive.

Meadow of Love absintheLins' absinthes include “Walton Waters” and “Meadow of Love,” which are infused with blends of hyssop, lemon balm, anise, fennel and wormwood. Lins is the recipient of several national awards including New York International Spirits Gold Meadow Winner and Distillery of the Year in 2010. Her products can be found locally at Breakey’s Liquors on Bridge Street in Walton, Ray’s Liquors on Main Street in Delhi and Catskill Cellars on Route 206 in Downsville. Spirits cannot be purchased at the distillery. Further afield, her products are available in Kingston, Saugerties, Rhinebeck and at Astor Wine & Spirits and Bowery & Vine in Manhattan, and at Uva in Brooklyn.