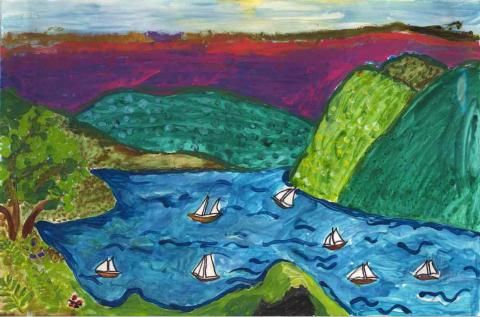 Poster by a Bennett Elementary School fourth-grader, included in a 2009 exhibit at the Ulster County Clerk's Office.

With enrollments falling and budget battles growing ever fiercer, the Onteora Central School District will soon have to face the agonizing decision of whether to close one of its three elementary schools.

At a financial presentation in September, consultant Rick Timbs told parents and community members that Onteora -- like many a district in the region -- badly needs to trim its sails to avoid racking up an $11.38 million deficit by 2017.

With fewer pupils and projections calling for declining enrollment to continue, three elementary schools are no longer needed. But by raising the possibility of closing a building, Superintendent Phyllis McGill and the Onteora Board of Education are heading straight into stormy seas. Everyone wants a fiscally responsible district. No one especially wants to see the elementary school in their own town close.

A presentation at the Tuesday, December 13 board meeting will offer hard data on potential cost savings and building capacities.

One possible reconfiguration has been christened the “bookends” option, in which the Woodstock and Phoenicia schools would each house grades K-3, with Bennett Elementary holding grades 4-6. The plan is also known as the "Princeton Plan," after a 1940s plan devised in Princeton, New Jersey to integrate a racially segregated school district.

If the district opts to close one school outright, they can either run one building for K-3 students and the other for 4-6, or run two K-6 elementary buildings.

McGill has said she is leaning toward the bookend plan. Critics of that option say that the plan is simply a stopgap measure aimed at avoiding the tough issue of closing Phoenicia Elementary.

Former board trustee Rita Vanacore feels that the bookend plan will only delay a school closing, not prevent it.

“Thinning out the student population so that we can have attendance in each of the operational buildings only delays the inevitable,” Vanacore wrote in a letter to the current board.

“I've been getting lots of letters, and there are rumors going around -- there are always rumors,” she says. “We certainly haven't decided on an option yet. Everything is still on the table. And our focus is still what it always is: to be fiscally sound while providing the best possible programming for all the children of the district. I don't think anybody wants a school to close. There is definitive research on what having a school means to a community.”

To inform the community and gather feedback, school board members have been attending town board, PTA and other meetings, and are holding half-hour Q&A forums before each board meeting. Whether this is sufficient or not depends on who you ask, as does whether or not the board members are likely to be unduly influenced by where they themselves live.

McGillicuddy disputes the idea that the board's Shandaken-heavy membership will influence the outcome.

“No, we do not all live in Shandaken,” said McGillicuddy. “Three of us live in Woodstock. We've been running unopposed the last two or three elections, and we've had five members resign in the past four and a half years.”

Bennett PTA president Sharon Wood -- who's not a fan of the bookend plan -- said the board is not giving the community enough time to weigh the decision.

“[In November] we were told February...now a decision date of mid-January is being stated.  This was only publicly discussed on October 25 for the first time.  A decision like this needs to be taken seriously - all the facts and figures need to be publicized. Six weeks, in my opinion, is not time enough,” said Wood.

Some districts that have adopted similar plans have had success with splitting up elementary grades. New Paltz superintendent Maria Rice, whose district has a K-2 and a 3-5 elementary, says the bookend idea could work out well if done properly.

"The way they're approaching this actually makes sense," she says. "There's no reason why the necessary cross-grade meetings and collaboration couldn't take place between the teachers in two buildings, you just have to do your scheduling and planning and make sure there's parity in programming and funding. A big concern in that district is how much time the little kids have to spend on the bus- they are factoring in their geography, as they should be."

“The option of closing a school to address the immediate financial difficulties is short sighted,” Luborsky wrote via email. “It's not beneficial to our district or any of our communities.  Restructuring the schools with the proposed "Princeton Program" offers a model that would make our district more attractive to new and current residents and possibly foster and maintain economic growth for all of our communities... Rather than having a knee jerk reaction of contraction, let us work together to support all of the positive things that are happening and push to make Onteora a dynamic and more attractive district.”

One thing is clear: the property tax cap and current economic realities make this budget season an especially trying one for school districts everywhere. Building closings are being proposed or have already been voted on in several of the region's other districts, including Rondout and Kingston, to the sorrow of parents and the community alike.

In Sidney, Masonville Elementary School and Sidney Center Elementary were closed immediately after the district had completed an expensive building project, creating what a district employee (who asked not to be identified) remembers as “meetings packed with irate parents."

"But we had to do it. Enrollment was down. It took a while, but everyone's settled in just fine now,” the employee said.

Maybe not quite everyone.

Masonville supervisor Craig Dumond is still smarting about the closing of the Masonville school.

“When the building project came along, we felt the project was an insurance policy in keeping our school. Obviously, the Board knew this and well as we were tricked into passing the project only to have our school closed 14 months after completion. As the saying goes...fool me once shame on you, fool me twice shame on me,” Dumond wrote on a Masonville community bulletin board recently, discussing a Sidney Central School proposition up for public vote on December 12.

The Onteora Board of Education meeting on Tuesday, December 13 will begin with a public forum at 6pm at Woodstock Elementary School to discuss reconfiguration.