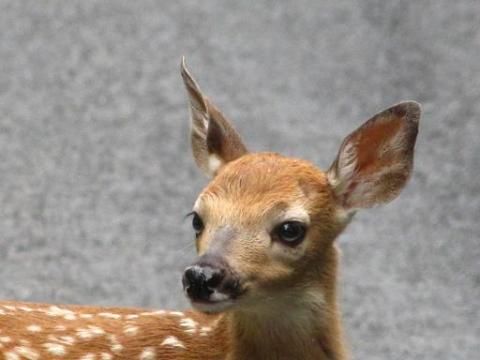 Photo of a fawn crossing a road in Delaware County last week by Jeremy Carden. Used with permission.

Last week, New York State's Department of Environmental Conservation released a draft of its new Deer Management plan, a new set of hunting guidelines for deer. The draft guidelines, which were hammered out based on suggestions made in a series of public meetings in 2009, make a few changes to current deer hunting rules.

According to a DEC press release, the biggest changes are recommendations to:

The draft rules are meeting with some controversy. The proposals to establish a special youth hunting weekend, to make bowhunting season start earlier, and to tighten up restrictions on shooting young "spike-antlered" bucks are all prompting objections from some hunters, according to the Daily Mail:

Chuck Parker, a retiree from northern New York who hunts in the Tug Hill region, said the big game youth hunting license is a great idea but a special youth weekend is unnecessary and would cut into field time for small game and waterfowl hunters because landowners commonly deny them access during the deer season.

Parker, who is first vice president of the New York State Conservation Council, also opposes the DEC’s proposal to open the bow hunting season in the southern zone on Oct. 1 rather than the current opening in mid-October.

“Generally, bow hunters already enjoy a high-quality hunting time to be in the woods,” said Parker, who’s from Mexico, in Oswego County. “Giving them additional time will only lessen the opportunity of success for those that hunt during the regular gun season.”

“There is no solid biological data that proves that antler restrictions improve deer quality,” Parker said. “I don’t shoot spike horns, but that’s my choice. Someone else who pays the same amount for a license, you’re asking him to pass up a deer, when it’s not proven that it will improve the quality of the herd.”

The DEC is accepting public comments on the draft Deer Management plan until July 28. You can email your comments directory to the DEC by clicking here.

How to stay safe outdoors during hunting season in the Catskills

Guide me a river: The art of Catskills wilderness guiding