Schoharie County: Counting its losses, and beginning to rebuild 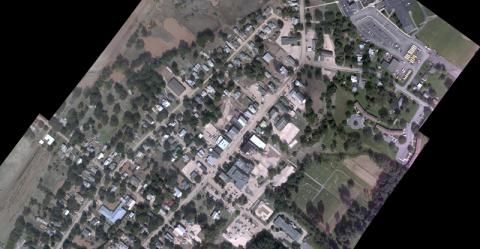 Aerial imaging of the village of Schoharie on Tuesday, August 30, courtesy of RIT researcher Jason Faulring. Cropped by the Watershed Post from the original, larger image.

Across the Catskills region (and beyond), Irene and Lee wreaked devastation on many towns. But in Schoharie County, the situation was especially dire, as the damage struck hard at the nerve center of the county. Government offices in the village of Schoharie were heavily damaged by flooding, plunging county government functions and communication with towns and villages into chaos.

Speaking by phone to the Watershed Post this morning, Middleburgh village trustee Matt Avitabile said that for the towns and villages, getting information from the county has been very difficult, and that the recent floods demonstrate a clear need for better countywide disaster planning.

"The county response needs a lot of work," he said. "Personally, I'd like to help serve on a committee that would help figure out what we did wrong."

(Count the Watershed Post in on that effort as well: We have learned a lot about disaster communication on the Internet since the floods began, and are eager to collaborate with any local government or first responder organization that wants to work on better ways of disseminating vital information in real time. Email us at [email protected].)

One bright spot in the chaos: The Schoharie County Emergency Services Facebook page, which has become a lifeline of local information since the floods began, and which now has nearly 5,000 followers looking to it for the latest on relief efforts, emergency warnings and much-needed services for flood victims.

Weeks after the floods began, the various pieces of Schoharie County government are still scattered around different temporary locations. Today's Schoharie Times-Journal has a list of the new locations -- and reports that the damage to the county's four office buildings could top $20 million, and take six to eight months to repair.

Meanwhile, on a broader scale, a team of imaging researchers from the Rochester Institute of Technology and Kucera International have stepped forward to help assess the flood damage in the Schoharie Valley. On Tuesday, August 30, a crew of researchers flew a Piper Navajo over the Schoharie Valley, taking 1,400 high-resolution aerial photos that spanned a 28-mile flood zone. (See the image above, composed from several such photos that have been digitally stitched together.) An article on the RIT website says that state and federal emergency responders and other scientists are studying the photos:

“One of the sensors is a shortwave infrared camera that is good for flood mapping,” says Don McKeown, project manager and distinguished research scientist in the Digital Imaging and Remote Sensing Group in RIT’s Chester F. Carlson Center for Imaging Science. “The state office of emergency management will use the imagery for recovery planning and damage assessment.”

The National Geospatial-Intelligence Agency and the Federal Emergency Management Agency also have requested access to the data. Researchers at State University of New York at Buffalo are also planning to use the imagery to assist in the development of improved watershed models for future events.

“For farmers, dealing with weather comes with the territory. We’re used to it. But nothing like this,” said Peter Gregg of the New York Farm Bureau. “A lot of soils were washed away. To have it washed away and replaced by contaminated mud is a concern.”

Local gentleman farmers (and TV personalities) Josh Kilmer-Purcell and Brent Ridge, a.k.a. the Fabulous Beekman Boys, are pitching in on the Schoharie County relief effort, and have secured corporate donations from Lean Cuisine and Johnson & Johnson (both clients of Kilmer-Purcell's) for flood relief.

In a recent post on their website, the Beekman Boys shared some heartbreaking photos of damage to local homes and farms, and urged readers who want to help Schoharie County to donate to the Capital Region's Online Farmer's Market and the Schoharie County Community Action Program.