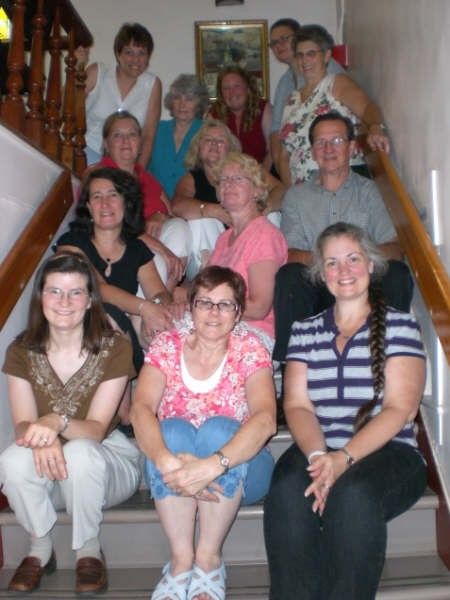 The staff of Delaware County's Office of the Aging.  Retiring director Tom Briggs is the gentleman sitting on the right.  Photo via Delaware County New York website.

The Delaware County Board of Supervisors had a short docket for July -- nine resolutions that all passed unanimously at last night's meeting -- which left ample time for praise and fond farewells to Tom Briggs, the director of the county's Office of the Aging.  Briggs helped start up  the office 36 years ago and has served as its director since 1982.

Briggs' replacement, Wayne Shepherd, was approved as the new director by unanimous vote.  He will begin his tenure as director on August 17.

Chairman Jim Eisel presented Briggs with a citation and poked a little fun, noting that in his tenure Briggs, like most of the board members, has become a senior citizen himself.  Praise for Briggs's dedication to the county's elderly residents and his resourcefulness came from Roxbury's Tom Hynes, Health and Human Services Director Bonnie Hamilton, and others.

The Office of the Aging assists seniors through programs as diverse as Meals on Wheels, installing emergency alert systems, dispatching volunteers to provide in-home care and connecting the eligible with the HEAP program to offset winter heating bills.

Briggs graciously accepted the accolades.  But he used his farewell speech to sound a warning: Residents of Delaware and other rural counties might well be affected by a 'paradigm shift' that drastically reduces government's role in their care.

He noted that while he has always trusted in the good will of the board of supervisors, he sometimes has questioned its judgment, particularly concerning opportunities to streamline or simply cut back government services.  Small government, he argued, means fewer local and state funds and insufficient staff to attend to a county population that is steadily growing older.

"Some say [small government] is just the right medicine, but we in rural areas will be hurt the most," he said.

A partial privatization of health services has already come to the county. Last month, the board approved the sale of its certified home health  agcncy and its long term health care program to a Rochester-based company, HCR.  Although the Office for the Aging was not directly affected by that sale, its goal of helping county seniors keep living independently in their own homes was described as a challenge by several of Briggs' well-wishers.  Hynes described the office's building on Court Street in Delhi as 'terrible.'

In closing, Briggs suggested that board consider taking some of its own austerity medicine.  There are 19 supervisors in Delaware County, he noted, along with 19 town clerks, 19 town justices, 19 town counsels, 19 highway departments and assorted other officers.  In hard times, Briggs said, "this is a luxury that may not be sustainable."

"There has to be a goal for a more regional government," he concluded.

His direct message to the board did not receive any comment, but Briggs did receive a standing ovation when he left the podium.