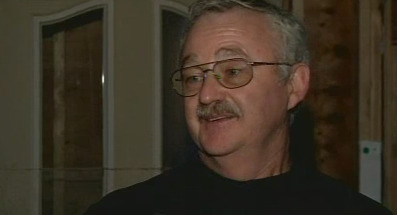 Alan Huggins, in a screenshot of a video interview with YNN.

Surprising most everyone except the Prattsville residents who voted for him, Alan Huggins appears to have defeated incumbent Prattsville town supervisor Kory O'Hara by a 15-vote margin (155 to 140) in Tuesday's election.  Huggins was not on the ballot and had to rely on a write-in campaign to secure his victory.  Though the results will not be official until sometime next week (see our full list of too-close-to-call races here), YNN reports that there were only 5 absentee ballots, so the unofficial results should stand.

Megan Cruz for YNN was able to catch up with Allan Huggins and town residents to get their reactions. Watch the video on YNN.com. Below is transcipt of interview.

PRATSVILLE, N.Y. -- "I was very surprised because not many people do the write-in thing,” Michelle Petricini said.

But 155 Prattsville residents did this past Tuesday and because of that, Republican Alan Huggins is Prattsville's new Town Supervisor.

"It felt great that they had trust in me to try to get them through this disaster," Huggins said.

A process people say, needs to happen a lot quicker.

"After two months, it's still in a state of despair and destruction," Jeff Schrier said.

"Get people back in their houses, get businesses back up and running," Petricini said.

Huggins beat out incumbent Kory O'Hara. The democrat is in his second term in office. But Huggins had also been the top boss in town, from 1987 to 2002. That's why residents say they rallied behind him.

"He always did a good job in the past," said Petricini.

"Is a knowledgeable person about government,” Schrier said. “He knows what he's doing."

But some residents, just 15 less than Huggins, thought O'Hara was doing a great job and deserved another four years.

"Under the circumstances, anybody thrown into a situation like this, I don't think he could've done a better job,” Carol Landers said.

"Oh definitely. That's why I'm kind of anxious to sit down and talk to him and get a lot of his plans and what he sees for the future," Huggins said.

That being said though, Huggins says he has some plans of his own.

"I'd like to get Main Street back so it looks like Main Street again and the tax base is a big issue for me," Huggins said.

“But do you think he'll be able to do it?” our reporter asked.

"I think he will. People have to give him a chance," Landers replied.

Huggins said, "I'll definitely serve in the best way I can, put all my energy into it and I'm looking forward to working with Kory and all the different organizations."

Now these results won't be official until next Thursday when the Greene County Board of Elections recanvasses the votes, but with only five absentee ballots, it seems like Prattsville has a new supervisor.