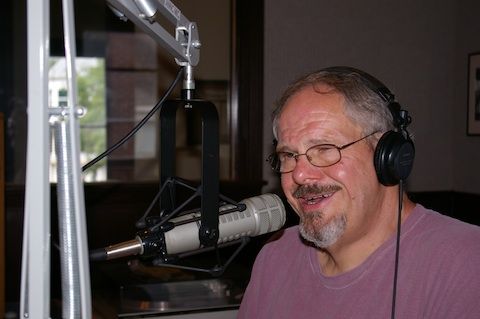 Bob Ackershoek, the owner of Cassie's Cafe in Roxbury, in his role as the co-host of a '70s rock show on WIOX.

Right before Labor Day, a corner of Delaware County will be getting its very own radio station.

WIOX, which will be heard on 91.3 FM, will begin broadcasting from a class A transmitter housed in a garage in the town of Roxbury, NY on Friday, August 27. The station was granted a rare full-power FM permit by the Federal Communications Commission in 2008 to fill an FM void in the region.

WIOX's signal is expected to reach a radius of 20 to 40 miles from Roxbury, which will cover the towns of Margaretville, Andes, Fleischmanns, Stamford, Grand Gorge, Prattsville, and Gilboa. Nobody knows for sure who will hear it, however, because the actual coverage will be determined by how the signal bounces around the hills.

Joe Piasek, a media educator and producer living in Roxbury, is the managing consultant for WIOX on behalf of the town of Roxbury.

“This is definitely an under-served area as far as media go," he said. "Occasionally you can pick up some radio stations, but they’re all from elsewhere."

“With so many different interests in the area that sometimes seem to clash, a radio station has the potential to fill some of the communications and information gaps and provide a platform for those interests to meet — not to clash, but to foster understanding.”

The station, which is being structured as a nonprofit with assistance from the Greater Roxbury Learning Initiative Corp (GRLIC), Roxbury Arts Group (RAG), and the MARK Project, plans to fund itself with grants, donations, and something called "enhanced underwriting."

“Enhanced underwriting is the way non-commercial stations advertise for local businesses,” said Glen Pedersen, the station's development director. “We will talk about our local businesses and sponsors in factual terms, we will interview them, so consumers can get to know who the businesses are and why they should be patronized."

The station is relying on local talent of all kinds, including students from area schools, who are enthusiastically invited to be interns. WIOX's programming schedule is still being finalized, but a long list of shows in a variety of genres are in the works:

Live in 3, 2, 1: Mike Teitelbaum and Bob Ackershoek practice their on-air routines.The entire WIOX schedule will be ready for publication in a couple of weeks. There are still a few openings for anyone with the time and a good idea. Training will be provided. Call (607) 326-9313 if you are interested, or email [email protected]. Other donations, from cash to office equipment, are also accepted.

On Friday, August 27, WIOX will host a launch party live and on the air at 91.3 FM. Starting at noon, everyone is invited to tour the studios, say “hi” on-the-air, and attend a ribbon-cutting at 5:00 p.m. Some of the show hosts have already recorded promos for their shows -- you can get a sneak preview by clicking the links below.

WIOX goes on the air