Get ready for more flooding

Thanks to the combination of rain and snowmelt that's expected to last all day today, the National Weather Service has issued a flood watch throughout the Catskills for today and tomorrow.

But in Walton, the flooding has already started, according to a hydrograph of the West Branch of the Delaware River, which shows the waters just a whisker below the 9.5-foot flood stage at 10:45am this morning: 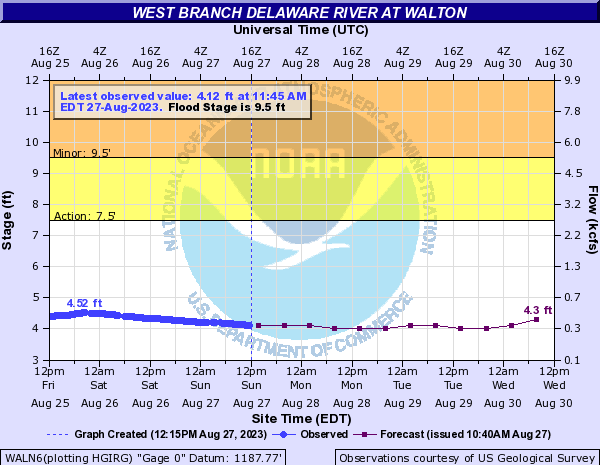 The NWS send out a flood warning for Walton this morning, warning that the floodwaters will rise to between 12 and 14 feet between now and tomorrow morning:

Flood Warning For The West Branch Delaware At Walton. * From This Afternoon Until Further Notice. * At 5:45 AM Sunday The Stage Was 7.4 Feet. * Flood Stage Is 9.5 Feet. * Minor Flooding Is Forecast. * Forecast...Rise Above Flood Stage This Afternoon And Continue To Rise To Between 12 And 14 Feet Monday Morning.

For Walton, this flooding promises to be almost as bad as last fall's October 1st flood, when the West Branch crested at 14.75 feet. That put  much of Walton under thigh-high floodwaters, as seen here in a photo sent to us at the time:

The hydrographs for other Catskill rivers show possible flood conditions, too. The Wallkill River in Gardiner, which already flooded once this week, is expected to hit 17.4 feet tomorrow: 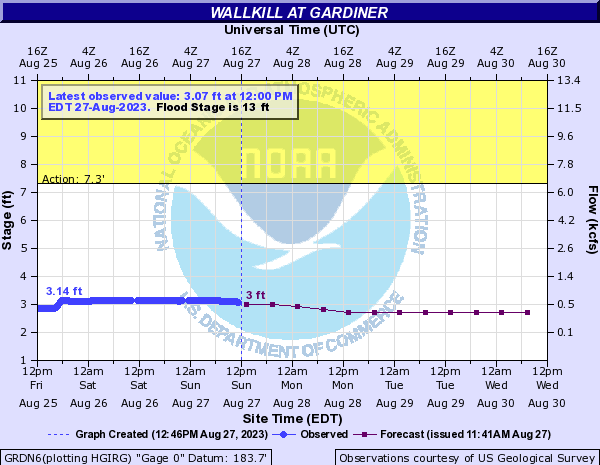 At that level, according to the NWS's historical data:

FLOODING BEGINS TO EFFECT RESIDENTIAL STRUCTURES ALONG SPRINGTOWN ROAD AND DUG ROAD IN NEW PALTZ. WATER LEVEL POSSIBLY UP TO 5 FEET IN THE WORSTEAD MILL IN MONTGOMERY.

The Roundout Creek is going to hit its flood stage tomorrow morning in Rosendale at 18 feet, a level at which it usally floods Route 209 in Accord: 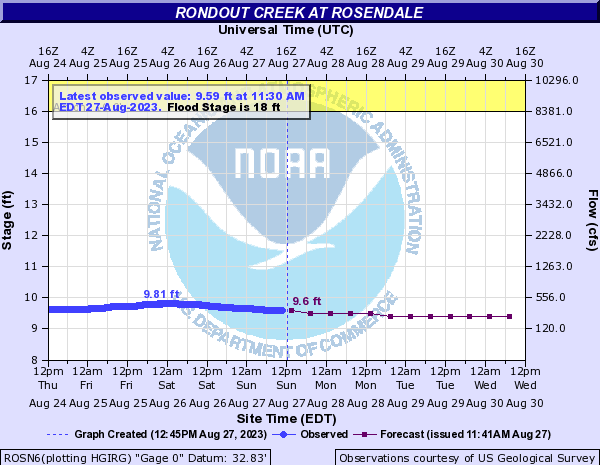 The Beaverkill at Cooks Falls upstream from Roscoe will crest just above flood stage at 10 feet sometime tonight: 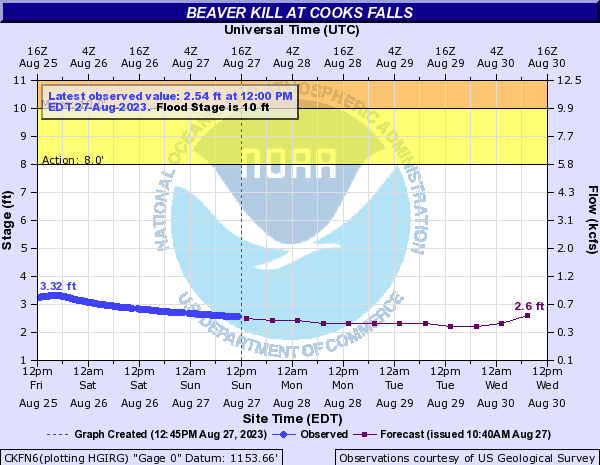 And while beleagered Phoenicia seems to get a pass this time around as far as flooding goes, the Esopus Creek will hit its 20-foot flood stage further downstream at Mount Marion tomorrow morning: 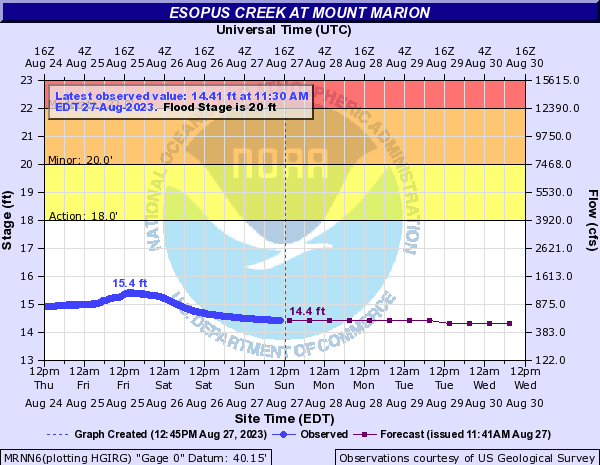 Flooding has been a big problem for Catskills communities this past year -- there were major floods in October and December. The issue is so problematic that the Ashokan Watershed Stream Management Program is making flooding the topic of its annual conference, in April.