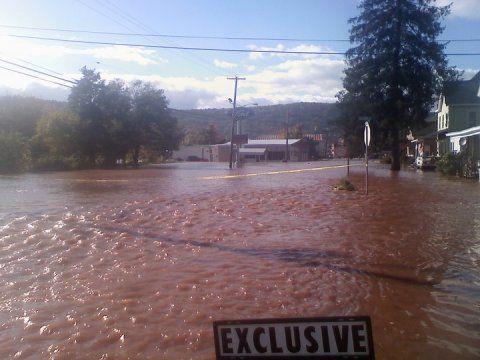 10/1, 10:30pm update: The Delaware county Sheriff's Office announced tonight that Delhi, Hamden, Walton and Davenport remain under a state of emergency, and all roads in these towns are closed to non-emergency traffic. According to a National Weather Service hydrograph, the West Branch of the Delaware crested in Walton this afternoon at 14.75 feet, which is only two feet lower than the level it reached when it set a record in 2006:

16.85 FLOOD OF RECORD OF JUNE 28, 2006. WATER UP TO SIX FEET DEEP IN BUSINESS DISTRICT ALONG DELAWARE STREET IN WALTON.

10/1, 5:45pm update: Walton is still in a declared state of emergency, according to the Daily Star, and you can see why by looking at the photo above, taken at the corner of Delaware St. & Griswold St. at about 4pm today. Below, another shot of the flooding on that corner, showing that the water is almost thigh-high. Both photos by Katheleen Maffei.

A brief video of flooding in Walton uploaded to the Weather Channel's website earlier today:

The Daily Star reported at 2pm that the West Branch was still rising:

Wright said the Walton Fire Department is in the process of asking Walton businesses to close. The West Branch of the Delaware River is still rising in the Walton area and is expected to crest at 14 feet between 4 and 6 p.m.

Click here for our main story on flooding throughout the Catskills region. We will be posting information about individual towns as we receive it. Email photos, news updates, etc. to us at [email protected], or leave a comment on our website. Thanks!