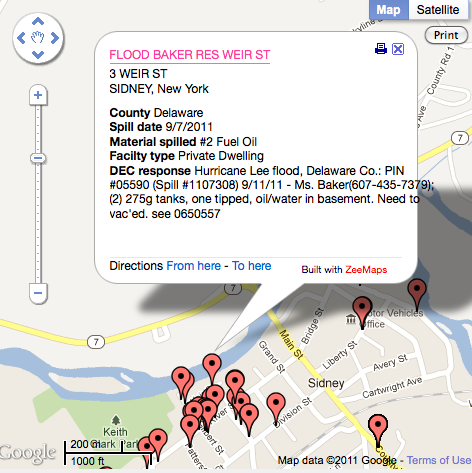 Above: A screenshot of the Star-Gazette's map of Tropical Storm Lee contamination in Sidney. Click here to get the the full interactive map.

The Elmira Star-Gazette has published a great piece of journalism this week. The paper has tracked down information about 156 spills of heating oil, raw sewage, diesel fuel and other contaminants in three upstate counties caused by Tropical Storm Lee.

The newspaper's team analyzed data from New York's Department of Environmental Conservation to map the locations and descriptions of the spills in Broome, Tioga, an Delaware Counties between Sept. 7 and 13. What it found is pretty disturbing, especially in the Delaware County town of Sidney, home to Amphenol, a large manufacturing plant:

One of the spill reports in Sidney was called in by Edward McHenry, who said in an interview with this newspaper that he noticed "an oily film" coating lawns and driveways on River Street, near the Amphenol facility.

"We've still got an odor. We're not sure exactly what it is," said McHenry, who believes state officials have not conducted air quality samples. "It's like a chemical smell but it's not really anything I've ever smelled before."

Sidney resident Todd Pasternoster said he has also had air quality concerns since he helped a friend rescue pets from a home that is now abandoned.

"There was a really, really, really strong odor in the water," he said. "It burned my eyes ... and when I got in the house it was even worse."

The newspaper has built a Google map of all the spill reports with clickable descriptions of each spill. The map includes quite a lot of data from Delaware County. Click on the map photo below to jump to the map itself: