When a newspaper stops printing locally 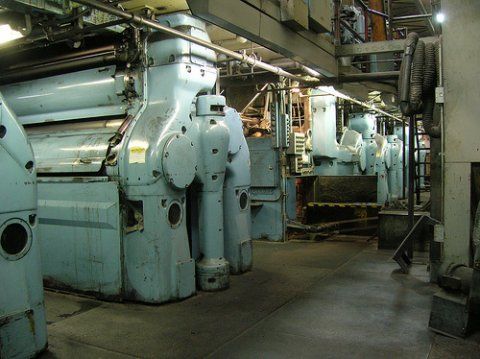 A few weeks ago, Daily Freeman publisher Ira Fusfeld announced on WGHQ radio that his Kingston-based newspaper is considering closing its local printing press and mailroom to save money. In a post on his Publisher's blog a week later, Fusfeld tried to dispel the rumors swirling about potential plan:

He said that the plan, if it materializes, is this:

We want to bolster our news and sales divisions, but to free up money for those purposes, we need to find economic efficiencies. And find them we have, we believe, if we close our pressroom and mailroom and print our newspaper at our sister company in Troy. Other savings can be realized by outsourcing our newspaper distribution operation -- that is to say, have someone else deliver the paper to homes and stores. Annualized, we’re talking about a considerable sum.

Fusfeld put a bit of a gloss on the fact that this "considerable sum" is largely made up of salaries for local jobs, which will disappear. (He was more frank about the looming layoffs in a follow-up blog post published this Tuesday.) Helpfully, the Kingston Times ran an article yesterday that explored that side of the story in detail:

If the plan goes into effect, Kingston stands to lose nine full time pressman and compositor jobs and 48 part-time driver and mailroom positions. Editorial, advertising sales and administrative staff would remain at the paper’s current headquarters at 79 Hurley Ave. in Kingston.

Because the whole idea of the scheme is to truck the print version of the paper 60 miles from Troy to Kingston every day, the plan has a flaw journalistically as well, the Times pointed out:

Currently, press time for the print edition is 12:30 a.m., said Fusfeld — if the paper is produced in Troy presses will have to roll earlier to allow time to truck the papers south. According to Freeman reporter and Guild President Patricia Doxsey, that could leave late-breaking news, election results, sports scores and lottery numbers out of the next day’s paper.

But Fusfeld is prepared to take that risk -- largely, it seems, because he's not really aiming the paper at its print demographic anymore, as he told the Times:

Fusfeld acknowledged that earlier deadlines were “a downside” to the consolidation effort. The print edition, he said, would become “a different kind of product” with more in-depth stories and advanced coverage of events while the website would be readers’ primary source for breaking news. Fusfeld added that the company has no plans to begin charging a fee for access to the website. “We want people on the website,” said Fusfeld. “The demographic for print readership is older and we’re not attracting young people whose whole frame of reference is the Internet.

Photo of a decommissioned newspaper press in Ft. Wayne, Indiana by Jon B. Swerens, via Flickr. Some rights reserved.

A letter from the editor: The Watershed Post slows down