The oldest synagogue in Fleischmanns 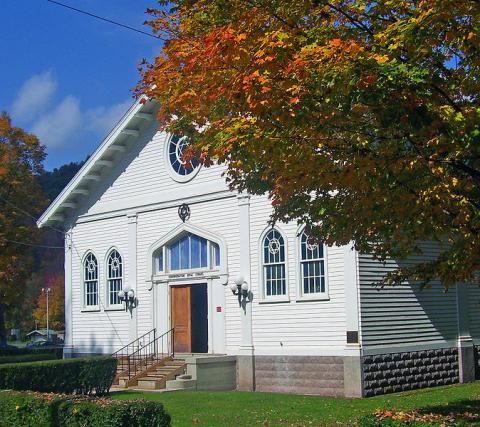 A few years shy of a century ago, Congregation B'nai Israel was founded by Jewish families from Fleischmanns and Margaretville. Its 1918 incorporation date makes the historic synagogue, located on Wagner Avenue in Fleischmanns, one of the oldest in the Catskills. (A few temples in Sullivan County, like the South Fallsburg Hebrew Association and the Hebrew Congregation of Mountaindale, beat it out, but not by much.)

Last September, the congregation, which is a member of the Conservative Judaism denomination, celebrated its 90th birthday with speeches, a day of festivities, and videotaped interviews of its members. (The interviews, which were compiled into an oral history project, have been posted on YouTube -- see parts 1 and part 2 here. Take a gander at the first installment below.)

About 160 families, some of whom faithfully travel to Fleischmanns from as far away as Woodstock and Phoenicia, call B'nai Israel their spiritual home each the summer. The synagogue's building, which is a landmark listed in the National Register of Historic Places, opened two weeks ago for its summer season, which lasts until the holiday of Sukkot in the fall. David Schneiderman, the president of the congregation, talked with the Watershed Post about the secret to B'nai Israel's longevity.

David Schneiderman: The synagogue originally was Orthodox in the early days, and it's been almost 25 years now that it's been Conservative. The Fleischmanns business people and farmers, along with some from the Margaretville, were responsible for the creation of the synagogue. They used to meet in different people’s homes, initially, and then they built the edifice, which was used for different holidays. The onerous winters of Fleischmanns prevented the building from being used in the winter. We [still] don't use it in the winter, because the building is not insulated.

WP: The synagogue building is a recognized historic landmark -- what makes it so special?

DS: We're listed in the National Register and New York State Register of Historic Places. The National Register of Historic Places, they felt that this was a one-of-a-kind, special spot in upstate New York. Internally, the synagogue is extremely beautiful. Plain, but beautiful. The Aron Kodesh, which houses the Torah, is hand-carved out of golden oak, with beautiful carved lions on it. Our sanctuary is probably one-of-a-kind that remains from the turn of the century, from the early Eastern European style of synagogues in New York City. That style of ark was popular on the lower East Side of New York City in the late 19th century, and now they've disappeared. It's probably one of the few, and perhaps the only one, left.

WP: What’s a neat piece of trivia about B'nai Israel?

DS: There is a Jewish cemetery about a mile away from the synagogue on old Route 28. We have a good number of ex members who are buried there, and one of the notables is Gertrude Berg, whose stage name was Molly Goldberg. She was a radio, and then television, star, and was one of the first people to create a sitcom. [In 1949, Berg’s long-running radio show, The Goldbergs, which she created, wrote, and starred in, became a TV show on CBS. For clips from a documentary about Berg, click here. -- Ed.] Her father was a member of the synagogue, they had a house in Fleischmanns. They ran a small hotel, and she entertained there; it’s where she got her start. She's buried in our cemetery with her parents.