Hope is the thing with udders 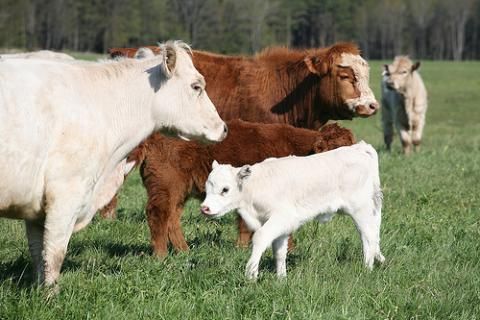 Over at Goldilocks Finds Manhattan, Ulla Kjarval captures a few bonding moments between cows and calves on her father's farm, Spring Lake Farm in Meredith.

Mothers. They are important to us and on our farm we breed for mothering ability just like we do other important traits. Good mama cows are the foundation of our herd and farm (thankfully being a good mother is a natural and strong instinct). In fact, on beef farms ---even on conventional cow/calf operations--calves are kept with their mamas until they are weaned.

Local beef producers like the Kjarvals are rejoicing this year at a bit of good news: In April, the USDA gave the green light to a mobile slaughterhouse in Stamford, one of the first of its kind in the country. In a region where there is high demand for local grass-fed and organic beef, good land for raising cattle, and plenty of farmers interested in reaching the bottomless NYC beef market, slaughterhouses are the most obvious missing link in the local food economy.

The Eklunds, who are fourth-generation organic dairy farmers, were building a meat-processing plant when Glynwood contacted them. They said the response from farmers has been tremendous and positive. Even before they opened the M.H.S., they knew they’d made an impact.

“We had a farmer drive here over an hour,” said Jim, a sturdy, fast-talking 29-year-old with fresh guts on his boots. “He said: ‘I just wanted to see for myself. I sold my cows off three years ago. Couldn’t get ’em processed in a timely manner. It cost me too much to keep up. Saw you’re doing this. Think this is great. I’m gonna go home and buy cows again.’ ”

Apologies to Emily Dickinson for the headline. We couldn't resist.

Stamford slaughterhouse: A new link in the Catskills food chain

Farewell to fair week
NYT on dairy farmer suicide
Are you local? A guide to supporting your neighborhood organic dairy farmer