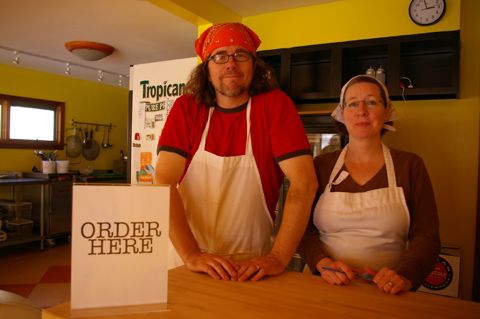 Little Catskills towns have a funny way of messing with your plans. Five years ago, staunch Brooklynites Frank and Cherie Davis settled in Roxbury (population: 2,509), thinking it would be a cozy spot from which to run their web design business. Somewhere along the line, they learned to chop wood, and were seized with a passion for brisket. These days, the Davises can usually be found behind the counter or in the smokehouse of the Cha Cha Hut, Roxbury's newest eatery. Since its debut in January, it's been a safe haven for Texas-style barbecue in a world drowning in high-fructose corn syrup. The Watershed Post caught up with them recently as they were trying to get a smoker delivered in the middle of a snowstorm.

Watershed Post: There are probably more ways to make barbecue than there are people in Roxbury. Which side are you on in the barbecue wars?

Frank Davis: Firmly in the Texas and Carolina realm of things — Texas by way of no saucing, Carolina by way of pork. My brisket is Texas, my pork is Carolina. But I'm firmly of the belief that most Northern barbecue is crap. Most people who have had barbecue in the North haven't had barbecue. Some people are like, “You don't sauce your meat? What do you mean it's not swimming in a giant orange pile of goop?”

Cherie Davis: We spend three to 10 hours smoking something. We're not going to slather it with sauce. We want you to taste the meat.  Saucy things: The Hut's line of homemade condiments.

WP: But you do have sauces for people to add themselves.

CD: We just added the sixth one to our regular menu. And Frank just made one this morning we're experimenting with. It's called Gogo Yubari — as in Gogo Yubari from Kill Bill.

WP: How did you decide to come to Roxbury?

CD: We lived in Brooklyn, and we owned our own business, and we could live anywhere. We started looking at houses on the Internet. We saw this one, we made a bid on it and we moved. We had never been here before, we knew absolutely nobody. It was my fortieth birthday. That was my midlife crisis.

WP: How did you first start down the path of barbecue?

FD: I've always been the cook of the house. When we moved up here the first thing I did was grab a Weber kettle grill. And it went from there off into a little cheap smoker from Lowes. And then a wood fired grill. We went through three-and-a-half tons of charcoal, two cords of wood, and about a ton of meat to figure out what we were doing over the last few years. Ba-B-Q: A small customer samples the brisket.

FD: That is the big problem with barbecue, especially in a restaurant situation. It's not like you can go “Oh, I'm running low on pulled pork,” and go get a pork shoulder.

WP: I hear there's a new phrase creeping into the local vocabulary: “rib o'clock.” Want to explain that?

CD: Rib o'clock is four o'clock. It's when the ribs are ready and you can start getting ribs from the smoker.  The ribs take five hours to do.

CD: Pork butt, for the pulled pork. It can take anywhere from eight to ten hours.

WP: Any parallels between web design and smoked brisket?

FD: None whatsoever. Being a maker is much better than being a web designer, in my opinion. Maybe not today in the midst of a driving snowstorm, but this summer when I'm rocking the smoker with a pair of shorts on and the door open, it's going to be pretty nice.

The Cha Cha Hut is on 2310 Bridge St., Roxbury, between the Public Lounge and the Roxbury Motel. On the web, you can find them on their website, Facebook, Twitter or their listing in our local business directory.

Something fresh in your neighborhood? Let us know at [email protected].

When the going gets tough, the tough collaborate
Cha Cha Hut BBQ planning a move to Andes