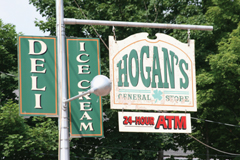 Since their tiny Roxbury BBQ joint was destroyed by fire last month, Cha Cha Hut owners Cherie and Frank Davis have been scouting nearby hills and valleys for a new location. (They're parting ways with their former landlords, Bridge Street Roxbury LLC -- a recent post on the Cha Cha Hut's blog indicates there's no love lost there.)

Their new location: Hogan's General Store in Andes, whose owner, Don Hogan, is welcoming them with open arms. Hogan says he heard of the Cha Cha Hut's search for a new home via a bit of gossip at the golf course, and immediately thought his place would be a good fit.

"I was looking to do some kind of venue in here. What was holding me back was my time," he said, sitting at a table in the dining room behind the store.

The Davises plan to spruce up the space, and will have some tables in back overlooking the Tremperskill Creek. They're looking forward to the move, though it won't be until at least early fall; in the meantime, they're hosting weekly cookouts at their home in Roxbury.

Frank said they had looked at many potential locations up and down the Route 28 corridor. "To me, it's not so much the town as the space, and the person who owns the space being excited about us," said Frank.

Hogan is indeed thrilled with the venture. Though the Andes Hotel draws a substantial dinner crowd (not to mention a beer-and-cigars-on-the-front-porch crowd), Andes is pretty low on dining options; the recent closing of the Cantina and the Slow Down Food Cafe effectively halved the number of restaurants in the village. Recently, Hogan's has been venturing further into the food business, baking pastries on the premises and dishing up a surprisingly good New York-style takeout pizza.

"The pizzas have been slowly gaining speed. But a lot of people don't associate a general store with good food. With the BBQ sign out front, I think we'll become a destination," said Hogan. "I think it's going to be good for everybody in the town."

One potential wrinkle: The Davises may have to rename their signature menu item, the aptly-named (and enormous) Grand Gorge. It's named after the valley Roxbury is nestled in. They're taking suggestions for a new moniker.