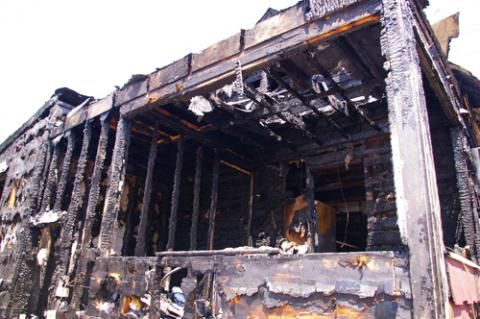 The rear of the building at 2310 Bridge Street that housed the Cha Cha Hut was gutted by fire early this morning.

Just opened in January, the Cha Cha Hut in Roxbury was already well on its way to becoming a beloved local institution. But around 2am this morning, the little BBQ restaurant on Bridge Street went up in flames – along with all the future plans of its owners, Frank and Cherie Davis.

Reached at their home in Roxbury earlier today, the Davises were despondent. Around midnight, Cherie said, she shut the smoker down for the night and left the restaurant. Three hours later, they got a call telling them the building was in flames.

“It was pretty much out by the time we got there,” said Frank. “I've pretty much been in a depressive coma since then.”

Neighbor Bill Buccheri, who lives across the street, said he was the first to call 911. When he saw smoke coming from the building, he said, he wasn't alarmed at first. “I thought they were smoking meat for Memorial Day weekend,” he said. But by 2am, the fire had begun to consume the building. “I heard a whoosh – that was apparently the windows blowing out. At that point the rear of the building was fully involved.”

The formerly bright and cheerful counter of the Cha Cha Hut.

Today, with the fire extinguished, the rear of the building was a mass of charred timbers. Inside, the walls and kitchen were warped and blackened with smoke. The building next door, which holds the Public Lounge and a small office space, appeared undamaged except for a broken window.

Allen Hinkley, chief of the Roxbury Volunteer Fire Department, said the cause of the fire had not yet been determined.

"It's still under investigation. The insurance inspectors are looking into it," he said. "We do know it started in the rear of the building."

It was too soon to say whether or not they would try to reopen the Cha Cha Hut, the Davises said.

“We would love to reopen at some point,” Cherie said. But without their commercial kitchen, and without their specially ordered BBQ smokers – which, she said, take a minimum of ten weeks to commission – they have few options. “We're basically down for the summer, unless the small smoker can be saved.”

“The problem is, if they don't want to rebuild that space, we've got nowhere to go,” Frank added.

The Davises had leased the building from the Roxbury Bridge Street L.L.C., an enterprise with several owners. (The Watershed Post has not yet been able to reach manager Joe Piasek.) Frank said the couple, who had built the fledgling business largely with sweat equity, had lost everything in the fire.

The facade is relatively unscathed.

“It's not like we were sitting on a pile of cash. We were operating month to month. We were making enough to pay the bills. Everything was razor thin,” he said. “We basically have no money, except what will come in from the insurance.”

The Davises had been planning to host a benefit for the Roxbury Fire Department this Sunday, with live music and a party at their riverfront picnic tables.

“The irony of that is not lost on us,” said Frank.

Smoke damage on the wall inside the restaurant.

Though hardly a day has elapsed since the fire, the community is already rallying around the Davises. The restaurant's Facebook page is rapidly filling up with offers of help from friends.

"It's always sad to see a business go down. We need all the businesses we can get in the community. Hopefully they'll get back up and running," said Hinkley.

Peg Ellsworth, director of the MARK project, said there was an effort afoot to reorganize the planned Sunday event with the Roxbury Fire Department as a benefit for the Davises.

Greg Henderson, who owns the nearby Roxbury Motel with his partner Joseph Massa, offered his sympathy.

“We're obviously upset, and it's very tragic. We're concerned for Frank and Cherie,” he said. “We lost our house to fire, and we know how devastating that can be.”

Update: The Roxbury Arts Group will host a joint benefit  for both the Cha Cha Hut and the Roxbury Fire Department this Sunday, from 1:30pm to 4:30pm, in the Hilt Kelly Hall at the corner of Route 30 and Vega Mountain Road. Featuring music by the Horseshoe Lounge Playboys; bring donations and/or a dish to pass potluck style.

Note: This post was updated with additional reporting at 10:15pm on May 26.