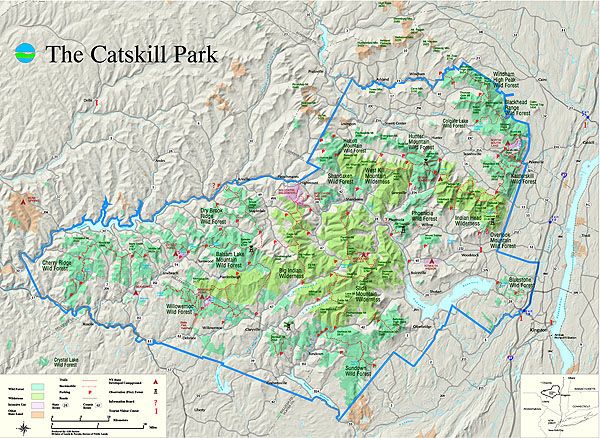 A map of the Catskills, in case anyone needs their memory jogged on where it is. Image via the NYS DEC.

Is it Snub The Catskills week in New York State? A couple of recent comments by prominent New York pols have us feeling a bit overlooked.

On Monday, Gov. Andrew Cuomo made an appearance in the Adirondacks announcing that his proposed budget contains a $20 million investment in major upgrades for ORDA's ski facilities -- but only for the North Country's Whiteface and Gore, leaving out any mention of ORDA-run Belleayre Ski Center in the Catskills.

The announcement was widely interpreted as a snub to the region by local pols and Belleayre advocates. State senator James Seward, a Republican whose 51st District spans the northern piece of the Catskills, issued a statement chastising the governor for leaving Belleayre out of his proposed ORDA upgrade:

“Belleayre Mountain Ski Center is a vital component of the economy in the Catskills and one of the many reasons people visit our region of the state. While the governor’s budget proposal includes an additional $20 million for upgrades at other ORDA-run ski facilities (Whiteface and Gore) he seems to have forgotten about Belleayre. As we work to fine tune the state budget in the coming weeks, I will be certain to remind him that Belleayre is deserving of added state attention.”

In 2015, Senator Seward secured a $1 million state grant to construct a new medical center at the Belleayre Mountain Ski Center and vowed his support for additional funds.

“The state must make a strong commitment to support Belleayre Mountain, improve the facilities, and offer more reasons for tourists to visit the Catskills during the traditional ski season and year-round.”

State senator Kevin Cahill, a Democratic Assemblyman who represents most of Ulster County in the 103rd District, also vowed to fight for Belleayre funding, in a statement released to the Daily Freeman:

“As I have done every year since Belleayre was absorbed by the Olympic Regional Development Authority, I will continue to fight to assure that Belleayre and the community receive a fair share of ORDA’s capital investment. That was the promise made when the Legislature allowed Belleayre to come under the ORDA umbrella. I intend to require ORDA and the governor to honor that promise.”

Local Belleayre advocates had plenty to say to the Catskill Mountain News, which ran a front-page story on the issue this week. In it, reporter Joan Lawrence-Bauer -- herself a former spokesperson for Crossroads Ventures, which is seeking to develop a private resort next to the ORDA-run ski center -- quotes several outraged Belleayre supporters. Here's Tom White of the Coalition to Save Belleayre:

“This is totally unacceptable. This governor has given us lots of lip service but we’ve had to beg and claw for every dollar.” White, who was a key player in a group of local leaders urging the transfer of Belleayre to ORDA control, added “this is a direct slap in the face to our communities and the entire Catskill Region.”

The Delaware County Chamber of Commerce has also taken Cuomo to task for the omission:

So far, Cuomo's office hasn't weighed in on the issue (we have a call in to Cuomo's press office, and will update this post if we hear back from them). It's possible that a separate announcement about proposed Belleayre funding is forthcoming -- but if so, the governor could have avoided an entirely predictable local dustup by mentioning it in his North Country announcement.

Meanwhile, a little farther downstate, New York City mayor Bill de Blasio struck a tone-deaf note earlier this week in an announcement of $300 million for the construction of a city water tunnel:

New Yorkers run their taps without a second thought. And that’s because the city is taking care of its water. https://t.co/uHXiPBJK70 pic.twitter.com/pevTdl0hu0

We know he's got bigger issues on his plate lately, but we couldn't let that one slide.

People lost their homes in living memory so you guys could do this, you know. https://t.co/1RW7ZJNACy

As a region, the sparsely-populated rural Catskills is used to being overlooked in bigger political conversations, despite the region's critical importance to New York City and to the state at large. In a couple of weeks, a local delegation of Catskills nonprofits is headed for Albany for a "Catskill Park Awareness Day," to advocate for local funding and increased statewide attention directed toward the Catskills region. Looks like they've got their work cut out for them.