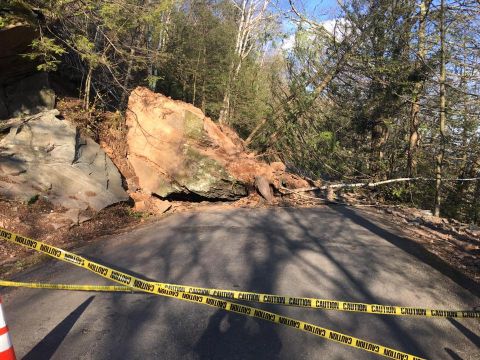 Above: A landslide on Platte Clove Rd. in the Greene County town of Hunter. Photo via the New York-New Jersey Trail Conference.

A landslide on Sunday, May 8 blocked narrow Platte Clove Rd. in the Greene County town of Hunter, according to the Daily Freeman and photos from the New York-New Jersey Trail Conference, which posted about the incident on Facebook.

The seasonal road, which is closed in winter, had just reopened to traffic on April 15.

Above: Another view of the landslide.

Farrell said workers were on the scene all day Monday breaking up the large boulder, which he said included “layered” rock and shale. He said that the landslide was slow enough not to damage the surface of the road.

Farrell told the newspaper that the road would hopefully be open again by 9 a.m on Tuesday, May 10.

Update, 5 p.m.: Platte Clove Rd. was cleared of debris and open by noon today. The New York-New Jersey Trail Conference has a photo of the open road, below: