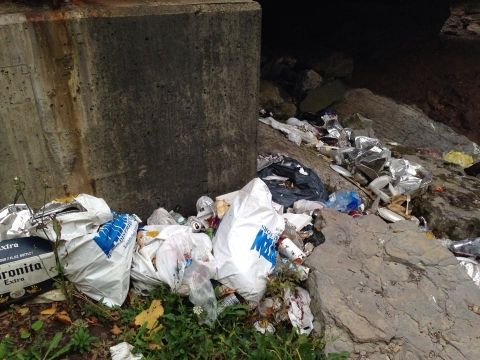 Route 23A in Kaaterskill Clove -- a narrow road that winds down a deep notch known simply as "the Mountain Road" by locals -- is one of the most breathtaking drives in the Catskills. It's also covered with trash.

When two Haines Falls sisters, Colleen and Courtney Brower, spent Sunday, Sept. 21 picking up litter along the road, they were shocked at how much trash they encountered.

"We filled about 25 30-gallon trash bags with trash," said Courtney Brower. "We filled six bags at the first parking lot."

In two-and-a-half hours, the women filled a pickup truck with a mountain of rubbish, all gathered from less than a mile along 23A, from just below Fawn's Leap to Moore's Bridge.

"There were water bottles, food bags, beer cans, beer bottles, liquor bottles, styrofoam plates, big catering dishes, and even a makeshift grill," Brower said. "It was bad. I can't imagine how much people would get in a whole day."

Some of the trash was already packed into bags. Much of it was just littered along the side of the road.

Beneath Moore's Bridge was especially bad, Brower said. "You couldn't see it from the road, but it must have been a whole summer's worth of trash."

Above: Trash under Moore's Bridge. Photo by Courtney Brower.

On Sunday night, the Browers drove to Tannersville to dispose of the trash, which filled an entire pickup truck. The dump was closed, so they went door-to-door asking to use the dumpsters of businesses on Tannersville's Main Street.

The Spinning Room Bar, Tops Friendly Market, and the Go Greene Food Mart took a few bags each. An employee at the Stewart's volunteered to take eight bags back to her home. Other businesses -- Last Chance Antiques & Cheese Cafe, Pancho Villa's Mexican Restaurant, and American Glory BBQ were also willing to help, but their dumpsters were just too full after a busy weekend, Brower said.

Colleen, 23, and Courtney, 26, grew up in Haines Falls and went to Hunter-Tannersville Central School. Their older sister, 29-year-old Emily, just got her master's degree in environmental science. She was one of inspirations for the sisters' day of environmental cleanup.

Not a new problem

Litter, traffic, and general bad behavior by visitors have been a problem in Kaaterskill Clove for years.

"We commute up and down the Mountain Road, and after every busy weekend people drive down on Monday morning and there's a substantially large amount of garbage along the road," Brower said. "We've been talking about it for years. So has everyone in town."

Above: Trash collected from less than a mile of Route 23A in Kaaterskill Clove filled a pickup truck. Photo by Courtney Brower.

So when the Browers posted photos of the trash they recovered from Kaaterskill Clove on Facebook, it struck a nerve. Over 100 people commented and shared the post, many of them calling on the DEC for a response.

The DEC posted a thank-you to the Browers on its own Facebook page, saying that "a visit to the location ... showed that the garbage bags had been removed." That post immediately attracted more criticism.

"Something needs to be done," Brower said.

Courtney Brower told the Watershed Post that better signage along 23A would be a good start.

Above: Litter surrounding a "No glass" sign in Kaaterskill Clove. Photo by Courtney Brower.

There aren't any signs that say that littering is prohibited in Kaaterskill Clove, Brower said. Instead, there are signs that say, "No glass." Those signs are routinely flouted, as the Browers' trash haul shows.

"If the signs were more helpful, or gave an idea of what was going on, that would be a start," Brower said.

Gary Slutzky, a Hunter resident who is one of the owners of the Hunter Mountain Ski Resort, began an impromptu call and Facebook message campaign to lobby the DEC to address the litter problem after seeing the Browers' photos of trash in Kaaterskill Clove.

In an open letter to the DEC posted on Facebook, he wrote:

The Kaaterskill Clove Clove is a Scenic Byway. Yet, neither NYSDEC nor NYSDOT do much of anything to bring this litter problem to a halt or attempt to clean it up. It's [one] thing for volunteers to adopt a highway in an area where the roadsides are relatively negotiable. It's an entirely different thing to scale steep banks over rip rap and crushed rock to try and access garbage, pick it up, bag it and then get it up to the roadside.

In response to a request for comment by the Watershed Post, a DEC spokesman issued a statement:

Kaaterskill Clove, as with most DEC-managed properties, is a carry in, carry out property, meaning that people are responsible for removing their own trash. Unfortunately, a small minority of the public chooses to leave trash for others to pick up at the expense of the environment and all New York State taxpayers. Forest Rangers routinely patrol the area in an attempt to prevent this illegal dumping as well as enforce the laws against those who choose to leave behind their litter.

DEC also relies on the assistance of our partners and concerned individuals to help care for our shared public lands. DEC truly appreciates all the efforts of concerned individuals who organize and participate in the numerous cleanups that take place throughout the year on our lands and along New York’s waterways. In addition, DEC welcomes any reports of littering on state land and will investigate and prosecute any individuals caught littering on DEC-managed lands.

Littering is prohibited along highways in New York State, but there isn't a strong law aimed at those who dump trash on state lands.

In the meantime, the chronically understaffed DEC relies on volunteers for help cleaning up state lands.

One of those volunteer groups is the New York-New Jersey Trail Conference. Another is the Catskill Conservation Corps, a volunteer group of trail maintainers which was launched with funding from the DEC in June.

Jeff Senterman in on staff at both the NYNJTC and the Conservation Corps. He said that he sees the most litter wherever roads run through the Catskill Forest Preserve, as they do in Kaaterskill Clove and Platte Clove.

"Along the hiking trails, there's not a significant litter problem," Senterman said. "Most hikers and visitors carry it in and carry it out. However, at very popular places where the general public has easy access, you have a much greater chance for garbage to pile up."

Especially food-related picnic garbage. Senterman saw just how much of it visitors would bring into the preserve when he used to live next to a Catskills trailhead in Greene County.

"People would get out of their cars with giant coolers and grills and be carrying them between them," he said. "They would never hike back out with them."

Above: A rusty portable grill was one of the items the Browers picked up near 23A in Kaatreskill Clove. Photo by Courtney Brower.

One way to help, Senterman said, is to join the Conservation Corps' litter pickup efforts. The Corps is holding a litter pickup at the top of Kaaterskill Falls on Saturday, Oct. 5.

Volunteer for future litter pickups by going to the Corps' volunteer page and mentioning that your interest is "litter pickup" when you fill out the form.

"We're just starting," Senterman said. "I would love to tackle roadways like 23A or Platte Clove Road or Peekamoose Road."