For the first time, two judges for Delaware County 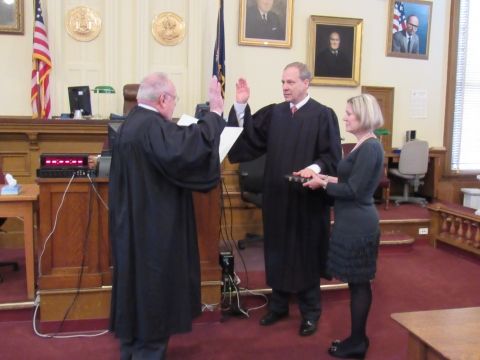 The main courtroom in Delaware County's historic courthouse was packed on Saturday, Jan. 2 as, for the first time, two county judges were sworn into office.

The role and qualifications of village and town justices was an issue in the family court race, as supporters of Kirkwood raised the claim that Rosa's experience as a town justice did not qualify him to be a “real judge.”

At the ceremony, Rosa paid homage to local judges, many of whom were in attendance, by taking his oath of office from town of Andes Justice Joseph Grieco and in remarks he made after being sworn in.

“Town and village courts are an integral and important part of our court system,” Rosa said. “They are real courts.”

Rosa thanked his family and supporters for helping with his election and said, “I'm anxious to make my start. I'm excited to make my start, knowing full well I'm going to make mistakes.”

Above: Delaware County Judge Richard Northrup, surrounded by his family, was sworn in by his predecessor, Carl F. Becker. Photo by Robert Cairns.

Northrup, Delaware County's longtime prosecutor, spoke of his move to the other side of the bench.

After taking the oath of office from Becker, he said, “I'm very humbled and honored to be able to assume the position of county court judge.” He said that Becker and retired state Appellate Division Justice Carl Mugglin “set an excellent example that I hope to replicate.”

Northrup thanked his family for its support and also singled out a former law partner–Walton attorney Micheal DeGroat – for praise. “I learned an awful lot from him,” he said.

Northrup told the crowd, “I will do my best to make you proud,” and joked, “Unlike Gary, I do not expect to make any mistakes.”

With Northrup's elevation to the bench, former Chief Assistant District Attorney John Hubbard of Stamford will become acting district attorney for Delaware County. He confirmed on Saturday that he will run for the position in an election to be held in November. “There will be a learning curve, but I've been in the office for 10 years and the chief assistant for six,” Hubbard said.