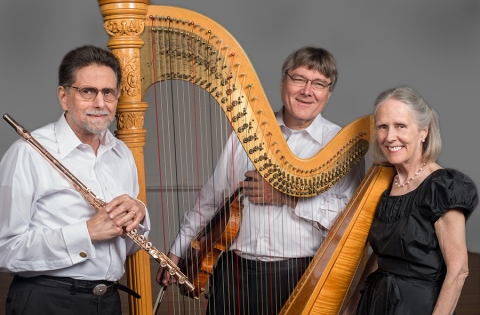 Boston’s Ensemble Aubade (Peter H. Bloom, flute; Francis Grimes, viola; and Mary Jane Rupert, harp) will perform the magnificent Sonata for Flute, Viola and Harp by Claude Debussy, celebrating the 100th anniversary of this landmark composition.   The piece received its world premiere in Boston (!) on November 7, 1916, more than a month before its Paris debut.  Other selections will include the lush and thrilling Sonatine en Trio by Maurice Ravel, the delightful Suite Brêve by Ladislas de Rohozinski, the evocative Trio for Flute, Viola and Harp by Arnold Bax, and the premiere of Karl Henning’s Oxygen Footprint.  The piece, written for Ensemble Aubade, is a scintillating romp, with vivid musical colors and vibrant rhythmic counterpoint.

Ensemble Aubade concertizes across the country, acclaimed for stellar musicianship and captivating performances.  The group has been hailed for “intensity, imagination, skill, and finesse” (St. Lawrence University) and “rich interpretations and beautiful contrasts” (West Claremont Center for the Arts).

Peter H. Bloom, flute, whose playing has been called “a revelation for unforced sweetness and strength” (The Boston Globe), performs in the U.S., Canada, Europe, and the Far East; is featured on 40 recordings (Sony Classical, Dorian, Leo Records, other labels); serves as historical performance consultant to Boston’s Museum of Fine Arts; is a faculty member of the Snow Pond Composers Workshop; and is a winner of the American Musicological Society’s Noah Greenberg Award.

Mary Jane Rupert, harp, praised by The New York Times as exhibiting "indeed real sensitivity," has performed throughout the world from Carnegie Recital Hall to the Beijing Concert Hall. She has appeared as concert pianist and harpist with chamber ensembles, choral groups and orchestras across the United States.  She serves on the faculties of Boston College and Tufts University and taught previously at Western Michigan University, MIT, and Wellesley College, where she taught harp for 20 years.

Francis Grimes, viola, has performed with the Boston Pops, Boston Opera, Boston Ballet, Masterworks Chorale and other distinguished ensembles, and regularly serves in the orchestras of the Colonial and Schubert Theatres. He toured nationally with the Star Wars Orchestra and has performed with choral groups in England, Italy and the Czech Republic.

Peter H. Bloom and Mary Jane Rupert, performing as the Duo “2”, have toured New Zealand, Australia, Thailand and across the United States.  They’ve been called “the very best players playing at the height of their powers” (University of Canberra College of Music, Australia).

This performance is generously hosted by the Stamford United Methodist Church at 88 Main Street in Stamford. Admission is by donation; the suggested donation is $12 per person, and $6 for seniors & students. There is no charge for those under age 13. Cash or check only; no advance ticket sales or reservations. Complimentary refreshments by A Taste of Europe from Cobelskill will be served at the conclusion of the concert. The Stamford United Methodist Church is handicap accessible and has ample parking.

For more information about Friends of Music of Stamford, and for a complete listing of concerts planned for this season, visit www.friendsmusic.org.