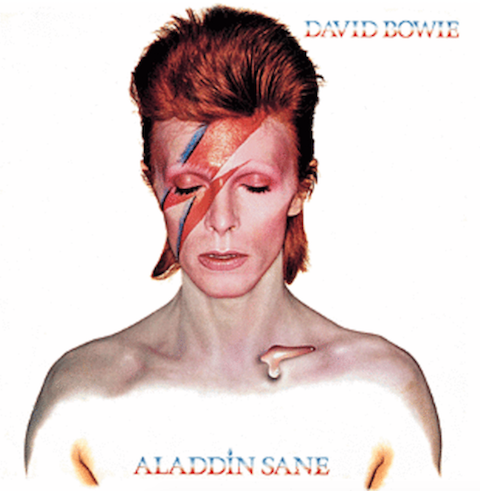 Above: Bowie on the cover of "Aladdin Sane."

British newspapers are abuzz with speculation that David Bowie's ashes could be scattered in the Catskills in the wake of the pop singer's death from cancer on Sunday, Jan. 10.

Bowie was a fixture in the Ulster County towns of Woodstock and Olive, reportedly hitting the 28 West Gym, appearing at Woodstock Day School and buying art supplies at Catskill Art and Office Supply.

Somewhere in Woodstock or Olive--although no one will say exactly where--Bowie and his wife, Iman, owned a mountainous retreat which several newspapers speculate might become the singer's final resting place .

The Daily Mirror breathlessly reported on Saturday that "David Bowie's ashes are to be scattered in the area surrounding his secret mountain retreat just a few hours drive north of New York City, it is claimed."

The Mirror story hangs that claim on an unnamed friend of the family. The article also includes shots of road signs and "No Trespassing" signs on Tonche Mountain in the town of Olive, which "might end up being the resting ground" for the star.

The Sun, which published an extensive story on Bowie's "secret mountain retreat" on Friday, also suspects that Bowie's ashes will end up in the Catskills:

Public records show Bowie had gone out of his way to keep his purchase of the mountain getaway a secret from fans. All his previous properties had been bought under his real name, David Robert Jones. But he used a limited liability company to buy the Woodstock pad. He paid £1.4 million in 2011 for the three-bedroom property and adjoining land. Built into the mountainside, he renovated the house to add two more bedrooms and bathrooms, as well as vast windows to make the most of the spectacular views. The extensive grounds — and numerous “keep out” signs and cameras — provide all the privacy a reclusive pop star needs...

After learning in November that his cancer had spread, it is understood he gave explicit instructions that he be cremated, then his ashes scattered ...

A Bowie spokesman said the scattering of his ashes was a family matter and declined to comment further.

Is it true? Who knows. Still, it's nice to imagine Bowie's remains floating over Route 28 and mingling with the waters of the Ashokan Reservoir in Olive, eventually flowing down to New York City as tap water.

Update: Bowie's ashes will be scattered in Bali, not the Catskills, according to the BBC.