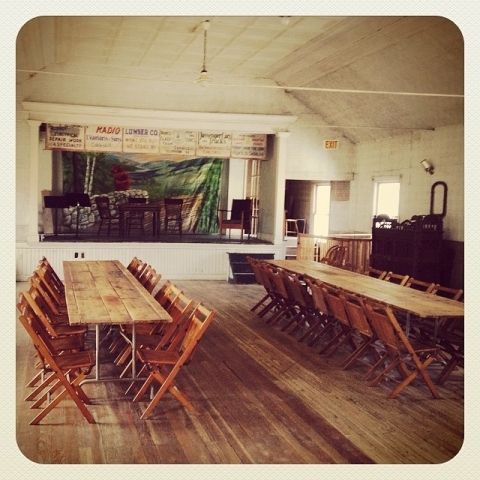 Above: The former Methodist Church Hall in West Fulton hosts a day of festivities in West Fulton on Saturday, April 11. Photos courtesy of Panther Creek Arts.

The tiny Schoharie County hamlet of West Fulton doesn't have much in it aside from a few houses and a former Methodist Church hall. But this weekend, it will host its own day-long festival, called "Tiny Arts Day in a Tiny Town."

The festival is packed with events. There will be a family vaudeville show, an artists reception, a three-course dinner featuring meats and veggies raised nearby, live music from a jazz trio and a mini-market featuring beer from Green Wolf Brewing Co., spirits from Kymar Farm Distillery and goodies from Bearsville Bakers.

Left: The Bindlestiff Family Cirkus Cabaret performs at 3 p.m. during the festival.

It's an excellent lineup, especially for a place that really is the middle of nowhere.

Upstairs, the hall boasts a large room with a stage at one end -- just the kind of space that begs for someone to dream up some programming.

McGiver and Blum began hosting community dinners and music events in the hall. Now, they've decided to go bigger, calling their venue Panther Creek Arts, after the stream that runs through West Fulton.

"We are all in the arts and music world and have contacts and interests in bringing great art, music, and food to West Fulton," said McGiver, who grew up in the hamlet and whose parents opened shops and put on theatrical productions in the community. "This is the first year, a sort of tester for future possible festivals,"

Her neighbors have been enthusiastic.

"We are bringing the building back into its own again," McGiver said. "[It's] a happy task that has us smack in the hands of the local community where turnout for events has been so enthusiastic. We are inspired by the community here!"

If you don't know the back roads of Schoharie County, finding the festival may not be easy. The organizers have directions on the site, but they're not entirely reassuring:

Essentially, you're aiming for a collection of houses that feels like it's in the middle of nowhere (the town isn't signed), but historically, this collection of houses IS West Fulton and all the other towns around here are just tagging along ... Mobile phone reception is terrible here, so chances are that if you get lost, you're not going to reach us. Just keep driving even though it seems you must be lost; it’s the only way to be found. I recommend stopping and asking people "Where is West Fulton?" and you'll get some help. Watch out for the deer too, there are a lot around here and they like goose-stepping across the road.