"The village became a living torch:" The 25th anniversary of Blenheim's pipeline disaster 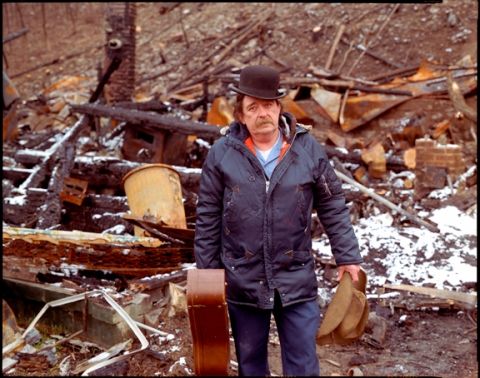 Above: Jim Gateley standing in the wreckage of his home a few days after it was destroyed. On March 13, 1990, leaking propane from a pipeline exploded in a massive fireball that engulfed the village of Blenheim. Gateley, who was in his house during the explosion, jumped in the shower to escape the flames. Then, with his beard on fire, he escaped, saving only his guitar. Photo by Gross & Daley, NYC.

Today is the 25th anniversary of a propane pipeline explosion that killed two people, injured seven more and left half of the Schoharie County town of Blenheim homeless on March 13, 1990.

The disaster began when an eerie white fog -- made of about 100,000 barrels of vaporized, highly flammable propane -- rolled down the hillside along County Road 43 from a leak in an interstate propane pipeline. The cloud of propane headed toward the village of North Blenheim, which is nestled in a valley along Route 30.

It was the beginning of rush hour. A school bus full of children passed through the fog on its way south.

The town's fire chief, Robert Hitchcock, was burned alive as he stood on Route 30, trying to keep drivers from entering the fog, which he had recognized as dangerous. A passing motorist, Richard Smith, was killed after he was engulfed by the flames.

Seven other people were injured. Many barely escaped their burning houses. Forty people lost their homes. Fourteen of the town's building's were destroyed. The fire burned for hours.

Nora Manon, who lived seven miles away in Gilboa, felt the explosion in her home.

Manon's husband and daughter narrowly escaped the disaster. They had just driven through Blenheim when the explosion happened.

"My husband was taking my daughter to work in Schoharie," Manon said. "They just got through the town of Blenheim and were in the next town, in Breekabeen. She called me, saying 'Mom, did you hear that?' I did hear it, I felt it, and I didn’t know what it was at the time."

The cause of the propane leak was shoddy repair work by the pipeline's operator, Texas Eastern Transmission Corporation of Houston, according to an investigation by the National Transportation Safety Board. Three weeks before the leak, a maintenance crew had left a piece of the pipeline "inadequately supported," and it broke.

The Daily Star's Joe Mahoney wrote an excellent anniversary story about the explosion earlier this month. It's well worth a read, particularly because of the terrifying black-and-white photos of the 15-feet-tall flames crossing roads.

Mahoney talked to Gail Shaffer, who was New York's Secretary of State and whose father lived in Blenheim at the time of the explosion, about 200 yards from the pipeline.

Shaffer told the New York Times in 1990 that the town had experienced ''a trauma that may never go away - people watched as the whole upper village became a living torch.''

She now lives in Blenheim herself, according to the Daily Star:

In Blenheim, however, Gail Shaffer said despite the litany of serious pipeline incidents across the nation since the Texas Eastern explosion, the federal government has not been aggressive enough in protecting citizens from the dangers associated with the infrastructure of the industry. The reason, she said, is "the cozy relationship" between federal regulators and the petroleum companies, with the regulators seeing their job description as serving the companies, not the public.

"It's almost like they (the companies) zero in on the most rural communities because they know we don't have a lot of power," Shaffer said.

Today's anniversary comes as several companies plan to build more pipelines along the same route through Schoharie County. These pipelines will hold natural gas, which industry spokespeople say is safer than propane when it leaks because it dissipates upwards instead of rolling along the ground.

Still, community members are wary. Against fierce local resistance, the Constitution Pipeline company is waging a successful battle to force 121 landowners to allow a natural gas pipeline to cross their lands, and the Tennessee Gas Pipeline Company is eyeing the same route through Schoharie County for its own natural gas pipeline.

Other articles and sources: