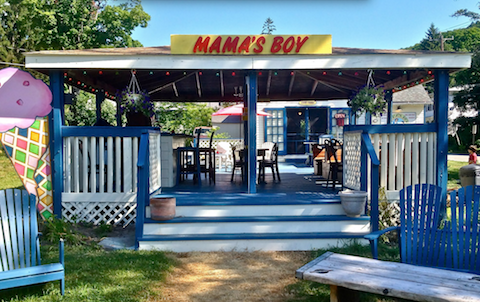 Above: Mama's Boy Market in Phoenicia. Photo via the Mama's Boy Facebook page.

Mama's Boy Market, the funky little coffeeshop in the heart of the Ulster County hamlet of Phoenicia, will close on Monday, Nov. 30, according to owner Michael Koegel.

"We lost our lease," Koegel wrote in an email on Wednesday, Nov. 25. He elaborated in a post he published on Tuesday, Nov. 24 on the Mama's Boy Market Facebook page:

It is with great sadness that I have to announce that Mama’s Boy Coffee Shop will be closing permanently on November 30th. Unfortunately, we lost our lease at our Phoenicia location and so our last day of serving the community will be this Monday.

Koegel opened the coffeeshop in a rambling building on what he called a "derelict lot" in the center of Phoenicia in the spring of 2010. The site was the site of the former Phoenicia Hotel, which burned down in 2007.

With its modest offerings of fresh espresso and coffee, free wireless internet and a large selection of meals from the deli case, the shop became the unofficial crossroads of the Phoenicia community. It hosted community-wide gatherings and parties. During the 2011 flooding in the aftermath of Tropical Storm Irene, it served as relief headquarters for the hamlet, hosting and organizing volunteers in a town-wide cleanup effort.

"Some people told me I was crazy to open a coffee shop in Phoenicia," Koegel wrote in his Facebook post.

"But then others, strangers, would see me outside working on the renovation or picking up debris and call out 'Thank you!' for doing something with this derelict lot in the middle of town. That’s when I knew I was doing the right thing."

Although Koegel is leaving Phoenicia, he will remain in the Catskills restaurant business. This spring, he launched Mama's Boy Burgers in the Greene County village of Tannersville on the five-year anniversary of the opening of his original coffeeshop. The Tannersville restaurant is doing well and will remain open, he said.

"If it wasn't for the good people of Phoenicia, Mama’s Boy Burgers would never have happened," Koegel wrote. "I learned a great deal along the way, made a lot of new friends in the community and started a new life in this coolest small town. And Phoenicia isn’t the place it was five years ago; if I had any part of that at all, I’m as proud as hell."

Update: Declan Feehan, the landlord of the former Mama's Boy Market, told the Watershed Post in a follow-up interview that Mama's Boy did not "lose its lease." Owner Michael Koegel's description of the circumstances surrounding the closure of the coffeeshop are "inaccurate," Feehan said. Gillian Johnson, the manager of Mama's Boy, was in talks with Keogel about becoming the owner of the business, but those discussions never gelled into a firm proposal, Feehan said, and Koegel never asked him for a new lease. "If he had come to me, I would have rented to him," Feehan said.