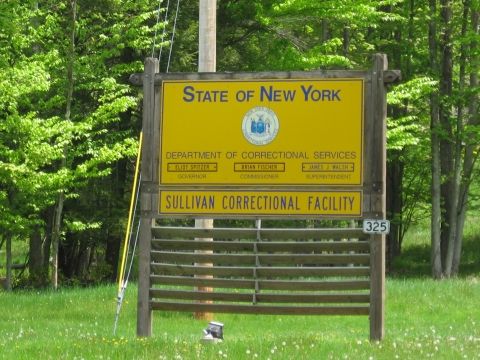 Above: The sign at the Sullivan Correctional Facility. Photo by Medic18 via Wikipedia.

An inmate at the maximum security Sullivan Correctional Facility in Fallsburg is dead and three correctional officers are injured, two with "serious physical injuries," according to the Daily Freeman, the Times Herald-Record and the Sullivan County Democrat.

Details about the incident are sketchy. The THR talked to a spokesman for the corrections officers union, which has been calling for more staff in mid-Hudson prisons.

James Miller, a spokesman for the New York State Corrections Officers Police Benevolent Association, said one of the injured officers was taken to an urgent care center and two others were taken to Catskill Regional Medical Center in Harris. One of those officers suffered a possible broken arm, and both had head injuries.

The Daily Freeman has more info:

Linda Foglia at the New York State Department of Correctional Services said the death on Monday at the maximum-security prison is being investigated by state police ... Michael Mazella of the [corrections union] said two of the three were transferred to Catskill Regional Medical Hospital with “serious physical injuries.”

There have been multiple incidents involving injuries to corrections officers at the Sullivan Correctional Facility in the past few months.

On January 19, an inmate punched a corrections officer, breaking his nose and cheekbone, according to a press release from the New York State Correctional Officers & Police Benevolent Association.

Another incident occurred on December 30, 2014, when an inmate attacked correctional officers who tried to intervene in his suicide attempt, the union said in another press release.

On Sept. 17, 2014, an inmate put a corrections officer into a chokehold through the bars of his cell, breaking the officer's clavicle and injuring his shoulder, according to a third press release.

The New York State Police are investigating the death of an inmate at Sullivan Correctional Facility. State Police responded to the facility Monday morning, following a report of an assault on staff. The investigation is continuing. Any updates will be posted here on the State Police online newsroom.