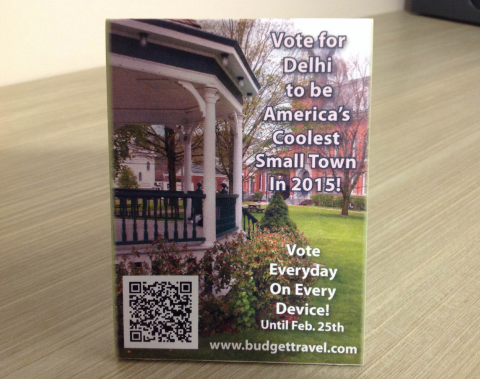 Above: Flyers asking residents to vote for Delhi every day until Feb. 25 are appearing in businesses around Delhi. Photo courtesy of Christina Viafore.

Delhi, the small Catskills town that serves as the county seat of Delaware County, has made it to the final round of the America's Coolest Small Towns 2015 contest, which is held every year by Budget Travel Magazine to celebrate towns nationwide with populations of under 10,000 people.

After an initial nomination round last fall, in which Delhi came in fourth, the town of 3,000 people is now one of 15 finalists in the contest.

Christina Viafore, the vice president of the Greater Delhi Chamber of Commerce, nominated Delhi for the contest back in October. Now she's gearing up for a campaign to get as many New Yorkers as possible to vote for Delhi in the finals. Ten winners will be featured in the magazine later in 2015.

"We are the only New York town, so we need New Yorkers to stick together and bring it home," Viafore said in an email to the Watershed Post.

Delhi is up against towns all around the country, including Chincoteague in Virginia, Fort Meyers Beach in Florida and tiny Berkeley Springs in West Virginia. Right now, Delhi is hovering at sixth place in the standings, with Grand Marais, Minnesota in the lead.

This isn't the first time the Catskills have been in the finals of the Coolest Small Towns contest. In 2011, the Ulster County hamlet of Phoenicia placed 6th in the contest, losing out to Lewisburg, West Virginia.

Viafore plans to win the entire thing this year. She has printed up table tents and has placed them around Delhi to convince residents to vote early and often. (Voters are allowed to vote once per day from a single IP address.) The contest runs through 11:59 p.m. on February 25.

To vote for Delhi in the contest, click here.

This Weekend: FireFest in Delhi