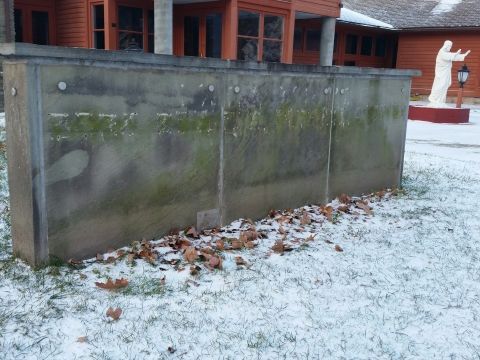 For four years, the name of a priest found responsible for sexually abusing minors has adorned the front of his parish's community center in the Delaware County village of Margaretville. Even after the Roman Catholic Diocese of Albany removed Robert H. Purcell from the ministry and forbade him from using the title “Reverend,” the imposing metal letters that spelled out “Very Rev. Robert H. Purcell” remained set in stone.

Until Sunday, Jan. 4, six months after Purcell’s death, when church officials announced the sign would be removed. Steven Scarmozzino, the current priest, made the announcement at Mass on Sunday morning at the Sacred Heart Parish in Margaretville. By the end of the day, the letters were pried off, leaving only a rusty shadow on a blank stone behind.

Church officials did not give a specific reason for the sign’s removal, and have not linked it directly with Purcell’s stained legacy.

The small Sacred Heart Parish, which says on its website that it has 300 registered members, has endured back-to-back sex abuse scandals involving its priests.

In 2010, another priest, James McDevitt, pled guilty in Middletown Town Court to two counts of forcible touching for spanking the bare bottoms of six area boys while he was a priest in Margaretville in 2008 and 2009.

Purcell’s case is murkier. Known as “Father Bob” to his flock, Purcell was the priest at the Sacred Heart Parish from 1978 to 2002. Years after he retired, an investigation by the Albany Diocese’s Sexual Misconduct Review Board found “reasonable grounds to believe” that Purcell had sexually abused minors. As a result, Purcell was removed from the ministry in 2011.

At the time it punished Purcell, the Diocese cited one case of abuse, from 1957, before Purcell was ordained.

But after Purcell’s death in 2014, in response to a query from the Watershed Post, the Diocese revealed that Purcell allegedly abused another minor in Margaretville from 1995 to 2001, while he was a priest. No information has been released about that more recent victim, who was reportedly repeatedly abused over the course of six years.

Purcell’s accusers have not spoken publicly about their experiences. They have little to gain by doing so. Despite what the Diocese says, some parishioners do not believe that any sexual abuse ever occurred.

“I believe that the Diocese, using the church, has thrown Father Bob under the bus,” said Bob Lawsine, a former member of Sacred Heart who lives in Arkville. Lawsine said in an interview this week that he left the parish because of his anger at the Diocese’s treatment of Purcell.

After being removed from the ministry, Purcell denied the accusations in the Catskill Mountain News and hired lawyers to fight the Diocese, arguing that his accusers were lying in order to get money.

Some victims of sexual abuse have received financial assistance from the Diocese to pay for counseling, said Ken Goldfarb, a spokesman for the Albany Diocese. Goldfarb said that he did not have specific information about Purcell’s accusers.

Despite the scandal, Purcell’s status in the community where he served as a priest for 24 years is still high. His name appears on a wing at the local hospital. When he died, a lengthy obituary submitted to newspapers across the state called him “beloved” and did not mention the abuse allegations.

In an unusual move, the Albany Diocese issued a statement last year condemning the obituary as "highly insensitive" to the people Purcell was accused of sexually abusing while he was a priest.

Still, Purcell’s name remained in a place of honor in front of the parish hall, which was sometimes used as a municipal polling place. If any of his victims wanted to vote in those elections, they would have had to do it in a building that was prominently dedicated to Purcell.

On Sunday, church authorities dismantled that most visible piece of Purcell’s legacy without linking it to the allegations of sexual abuse.

Father Steven Scarmozzino, Sacred Heart’s current priest, declined to discuss the matter with the Watershed Post, referring all questions to the Albany Diocese.

According to Ken Goldfarb, the Diocese spokesman, Scarmozzino read a letter in church on Sunday morning announcing that the sign in front of the Parish Center would be removed.

The letter was written by Rev. David Berberian, the Vicar for Clergy, on behalf of Bishop Edward Bernard Scharfenberger of the Albany Diocese. It referred to a report written by Sacred Heart's strategic planning committee.

Goldfarb read the letter over the phone to the Watershed Post. It stated that Bishop Scharfenberger “reaffirms his approval of the recommendation of the planning committee and asks that the signage be removed as soon as possible, as any further delay would be counterproductive.”

The Albany Diocese and Father Scarmozzino will neither confirm nor deny that the sign was removed because of Purcell’s sex abuse scandal.

Despite repeated requests, they also did not give a copy of the church’s strategic planning report to the Watershed Post. The report discusses why the sign must be removed.

Joanne Callahan, one of Sacred Heart’s parishioners who wrote the report, said that it doesn’t refer to the allegations against Purcell.

Instead, Callahan said, the report focuses on the fact that Sacred Heart is losing members and is struggling to pay its bills. A particular concern is that the parish hall which bore Purcell’s name is underused, she said.

“We met for weeks,” Callahan said. “We really had a lot of meetings to decide what we were going to do with that building. We came to the conclusion that, because it’s underused, we’re going to try to get it more used.”

Removing Purcell’s name from the sign appears to be key to that strategy. The day after the sign’s removal, a new group, the Society of Sacred Heart, met at the now-unnamed parish center for Mass and a potluck. The public was invited, and a Watershed Post reporter was warmly welcomed.

Scarmozzino celebrated Mass in the building’s small chapel. Afterwards, he doffed his robes to serve wine and chat with about a dozen of his parishioners, who brought homemade dishes to share. The atmosphere was jolly, with kids playing and adults bursting into improvised musical theater performances.

Scarmozzino, who had cooked his specialty, fried rice, for the event, said that the new group and a series of events—a Christmas party, movie nights—are part of an effort to open up the church to the community, especially to young people and families.

Update, 1/7/15: A St. Louis-based group called the Survivors Network of Those Abused by Priests (SNAP) has issued a press release in response to the Albany Diocese's decision to remove the sign with Purcell's name on it. From the press release:

We are grateful that Albany Catholic officials are removing the name of a credibly accused predator priest from a church building but saddened by their refusal to explain why and because of their apparent rationale for the move.