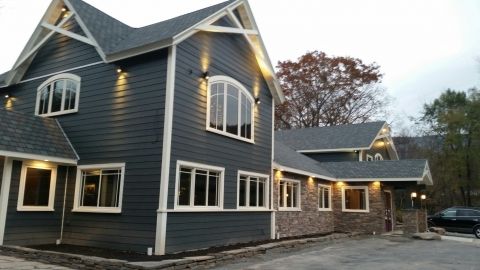 After 14 months of renovations, the Phoenician, Mike Ricciardella's fourth restaurant in the hamlet of Phoenicia, is open.

The restaurant is perched on the banks of the Esopus Creek, in a building that housed Al's Seafood Restaurant for over 70 years. After Ricciardella bought the structure in 2012, he tore half of it down and rebuilt it from scratch.

"It looks so much bigger," Ricciardella said. "Nobody ever believes me, but from one end to the other, it's the same footprint."

The revamped restaurant's construction has faced criticism from some of its neighbors. But Ricciardella said that all of the Phoenician's permits are in order. The restaurant's septic system has been inspected and approved by the New York City Department of Environmental Protection, Ricciardella said.

The Phoenician is an Italian-style steakhouse and seafood eatery, according to Ricciardella, who said that it quietly opened for business on Tuesday, Nov. 4.

Currently, the Phoenician is only open for dinner beginning at 5 p.m. six days a week, but Ricciardella plans to expand its hours to include lunches and a late-night menu.

Live lobsters and raw oysters trucked up from New York City three times a week are on the menu, as is porterhouse steak, a "five-spice grass-fed ribeye," and a "different style of cheeseburger," Ricciardella said. There's also a full bar featuring 14 craft beers on tap.

Now that the Phoenician is open, Ricciardella said that he plans to turn his attention back to Ricciardella's, one of the three other restaurants (the other two are Brio's and the Sportman's Alamo Cantina) that he owns on Phoenicia's Main Street.

"We're going to do something a little bit different with Ricciardella's," he said. "I want to keep busy."

The Eel Philosopher
Finding fish in the foodshed