The girl within: The real story behind Harvey Fierstein's 'Casa Valentina' 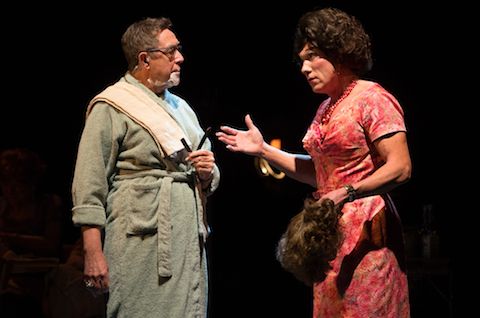 History has a way of revealing itself by accident. In the 1990s, antique-furniture dealer Robert Swope was browsing a flea market in Manhattan’s Chelsea neighborhood when he stumbled upon a treasure trove—a collection of photographs taken in the ’50s and ’60s of men wearing women’s clothing, beaming beneath neatly coiffed wigs and dressed to Eisenhower-era perfection. This cache of snapshots turned out to be a visual record of life at Casa Susanna, a midcentury resort outside of Hunter, New York that catered to a very specific clientele: heterosexual male transvestites.

Swope and his partner, Michel Hurst, gathered the photos into a book, Casa Susanna, in 2005, which in turn served as the inspiration for Harvey Fierstein’s Tony-nominated play Casa Valentina, currently playing to packed houses on Broadway. Fierstein’s play isn’t the only show to feature men in heels on the Great White Way right now: Audiences can also go see sparkly-heeled dancers in Kinky Boots (also penned by Fierstein) or watch Neil Patrick Harris strut his stuff in Hedwig and the Angry Inch. But where the former is about drag queens and the latter about a transsexual, Casa Valentina sheds light on the lesser-known subculture of straight guys who enjoy dressing up as women.

The resort became a part-time haven where transvestites could adopt their feminine personas with impunity. Guests rented bungalows for $25 a weekend, mingled with like-minded men, and received instruction in everything from applying makeup to walking properly in a pair of pumps. The getaway was something of an open secret in nearby Hunter, where weekenders would sometimes shop at the local market in full regalia. In a 2007 Chronogram piece on the subject, former Victory Store clerk Wilma Harty, then 81, recalled seeing the Casa Susanna regulars at the market:

"“They were to the hilt, you know—all out. The hair was all done neatly. Wigs, jewelry. They were overdressed for the market. They were dressed as city people—if you can use this expression—more than country people.” For a few weekends, Harty would smother her laughs until the ladies exited, and then trade notes with coworkers on what they wore and what they bought. But eventually, the drag queens were looked upon as regular shoppers. “They were pleasant and they didn’t bother anybody,” she said. “They brought in business.”

The photos in Swope and Hurst’s book reveal men dressed mostly in demure frocks and sensible pearls, playing Scrabble or watering the garden, knitting or laughing over dinner. There’s very little flashiness here—the shots show men striving toward a conservative ideal of housewifely perfection. In a 2006 article about Casa Susanna in the New York Times, a onetime guest identified only as Sandy recalls staying at the retreat:

“It was the most remarkable release of pressure, and it meant the world to me then,” he said. “I’d grown up in a very conventional family. I had the desire to marry, to have the house, the car, the dog. And I eventually did. But at that point there were all these conflicting desires that had no focal points. I didn’t know where I fit."

The notion of the “the girl within” was a topic much discussed in Transvestia, a bimonthly magazine (founded by transgender pioneer Virginia Prince) that published a regular column by Susanna. She once wrote: “Let us, for heaven’s sake, strive to forge a nice, clean cut, real person out of ‘the girl-within.’ Let’s give her a personality of her own.”

But Transvestia made no bones about who its intended audience was. The inside page explained that the magazine was “dedicated to the needs of those heterosexual persons who have become aware of their ‘other side’ and seek to express it.” It can be a tricky subculture to understand for modern audiences, and conflicts created by this very narrow definition of transvestitism form the backbone of the drama in Casa Valentina.

The story’s obvious villain is Charlotte (played to the Bette Davis hilt by Reed Birney), the founder of a Transvestia-like magazine who descends upon the resort with an anti-gay agenda in tow. “Fifty years from now, when homosexuals are still scuttling about as the back-alley vermin of society, cross-dressing will be as everyday as cigarette smoking,” she proclaims. Fierstein’s script is full of declarative statements like this from both sides of the argument, so much so that it can at times feel more like a seminar than a drama.

Fortunately, it also features plenty of clever one-liners—many from cheery housefrau/military man Bessie (Tom McGowan)—and a sense of this Catskills retreat as an early-’60s Garden of Eden. Director Joe Mantello’s excellent ensemble gets to the heart of what you can see just behind the eyes in those old photos: that donning dresses and brassieres makes these men feel free and happy on a deep emotional level. Witness the performance of Gabriel Ebert as he transforms from nervous newcomer Jonathon into blond-haired Miranda, releasing decades of tension from his shoulders as he gazes lovingly at his own reflection.

The play ends on a vague and melodramatic note, but this could be a case of art imitating life: Records of Tito Valenti and the fate of Casa Susanna all but vanish after 1970, when Susanna published her final column in Transvestia, shortly after she decided to live as a woman full-time.

In spite of its faults, there’s more to admire than frustrate in Casa Valentina; it’s a record of a time and a place that otherwise would only live on in a pile of peculiar snapshots.

On April 14, 2014, Time magazine published a digital gallery of photos from the resort, drawn from the 2005 book Casa Susanna.

Casa Valentina is at the Samuel J. Friedman Theatre at 261 W. 47th St. in Manhattan, through June 29. For more information, visit the play's website at casavalentinabroadway.com.

The road to ruins: 12 abandoned Catskills sites to explore
New life for Kutsher's resort as a yoga retreat center