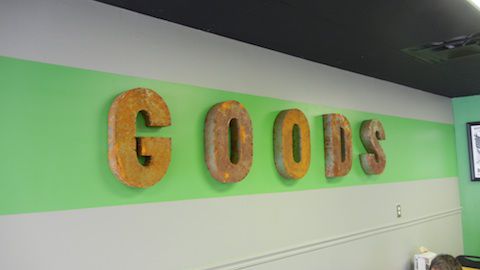 After five years as executive chef at Full Moon Resort and a career in traditional restaurants before that, Adam Kowalsky knew he wanted to do something different when he finally opened his own place. Living in West Hurley and raising three kids, the Chinese food and pizza options did not impress him.

“I wanted to come up with scratch-made fast food, where a family could come in, eat a nice healthy lunch, and move on,” he said.

Last week, Kowalsky and co-owner and partner Zach Johnan, who also lives in West Hurley, opened Goods Luncheonette in Boiceville, where everything on the small menu costs less than $10 and can be prepared in less than 10 minutes.

Above: Zach Johnan mans the stove at Goods Luncheonette. Photo by Jennifer Strom.

The opening offerings include an all-beef hot dog made in Albany, with a side of fries ($7), European-style hand-cut fries with rosemary and garlic ($4), Japanese-style boneless fried chicken marinated in soy sauce and ginger ($8) and a slow-smoked pulled-pork sandwich Kowalsky calls the best of its kind around ($8).

“The idea was to serve the ‘best of the world’s fast food,’” said Kowalsky, who is also keeping his job at Full Moon Resort. “We wanted to be like a food truck, but outside of a food truck,” he said.

All of the meats are all-natural, and the beverages are made with cane sugar, not corn syrup. Keeping the menu small allows the partners to make everything fresh every day; the restaurant doesn’t have a freezer. There are seven dishes on the regular menu now, with specials such as Philly cheese steak sandwiches and beignets that cycle in and out. By the end of the month, they plan to expand to 10 items, Kowalsky said.

Situated in a commercial strip at 4125 Route 28, just across the road from Onteora High School, Goods offers sit-down and take-out dining. It is open 11 a.m. to 6 p.m. Tuesday through Saturday and closed Sunday and Monday, for now. Future plans may include adding breakfast and extending a little later into the dinner hour.

Below: The sign above Goods Luncheonette in Boiceville. Photo by Jennifer Strom. 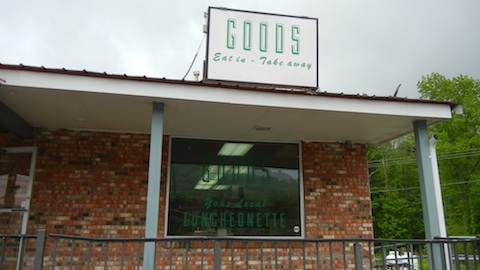