St. Patrick’s in the Catskills: Where to get your Irish up 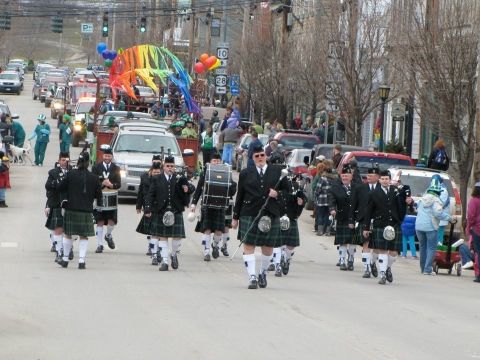 ‘Tis the season of the color green and wee mischievous creatures. It’s easy to see why celebrating St. Patrick, Irish-American style, is a well-loved rite of almost-spring; it’s just such a perfect time to kick out the jams.  In one form or another, St. Patrick’s Day has been actively celebrated for over 1,000 years.

Some Irish clerics may protest the bacchanalian aspects, but it seems likely that Paddy himself-  known for blending Christianity into Druid customs rather than vilifying them- might have understood.  So toss back a green beer in memory of a gentle crusader who first entered Ireland as a slave, returned to preach, and was mourned nationwide when he passed.

Below, our county-by-county guide to this fine bit o’ celebrating.

Albany’s official day of celebration on Saturday 3/16 starts with a mass and reception at Blessed Sacrament Church and continues with not one but two parades (one is in North Albany). Afterwards, everyone’s invited on over to the North Albany American Legion Post for classic corned beef and entertainment.

Saturday and Sunday, the folks from Pubcrawl.com are throwing a humongous party all over this college town’s bar scene. Sign up at City Beer Hall on Howard Street and get happy hour prices as you romp Albany’s finest public houses.

On Sunday 3/17, the Walton Theatre presents the traditional Irish music of Local Seisun, a joyous string band from the Adirondacks, in a cozy atmosphere over coffee and dessert.

The following Saturday, they’ll be parading through the Village of Delhi at noon.  The Greater Delhi Area Chamber sponsors the shindig, with local floats, scouts, bands and all the stirring energy of a hometown out to play.

The Irish I Was Skiing or Riding Festival will take over Windham Mountain on 3/16 and 3/17. Festivities incorporate a leprechaun hunt, a pipe and drum band and step dancing on the patio, and Irish music from The Ruffians in Legends Bar at the Base Lodge on Saturday afternoon.

Tannersville holds its annual St. Patrick’s Day Parade with all the trimmings on 3/16. Festivities step off at 1 PM.

The Fernwood in Palenville will be kicking it out all weekend long starting on Friday 3/15, when there’s a contest for Best Dressed Leprechaun and entertainment from DJ Lady Verse. Starting then and lasting through Sunday, they’ll be serving up the corned beef and cabbage and offering safe rides home. Now that’s some true Irish love, folks.

The Autumn Café in Oneonta is celebrating on Saturday 3/16. There’ll be Irish fare and merriment all day long. In the evening, starting at 9, a $5 cover gets you a “screaming good time”- St. Pat’s festivities with Banshee, a blend of Celtic, “old time,” blues and swing.

Uncle Marty’s Adirondack Grill in Averill Park is throwing a fine family bash on March 16, promising “fierce Irish fun,” which is plainly the kind to have. There’s a Kilt Run and a Shamrock Shuffle for the kids at the top o’ the morning, to get your blood pumping properly for an afternoon full of music, dancing and feasting.

Two parades are happening on Saturday, 3/16: the Third Annual St. Patrick’s Day Parade in Rock Hill steps off at one PM on 3/16, as does the Jeffersonville Fire Department’s parade. Both promise ample music and festive shenanigans.

That evening, come out to Bethel and tipple St. Paddy’s style at the Catskill Brewing Company, where they’ll be pouring handcrafted local original concoctions and partying to the roots country sound of the Somerville Brothers. Next door at the Dancing Cat Saloon they’ll be dishing out the corned beef and cabbage. The party starts at eight.

Kingston’s parade is this Sunday, 3/10, and the Ancient Order of Hibernians is known for going all out to make it a good one. The festivities kick off with the 25th Annual Shamrock Run down Broadway at 12:50 sharp, fun to watch in itself. The slower-paced but undeniably spunky parade steps off at 1 PM. “The Day is upon us; put the Rosary on the line and pray for good weather!” say the Hibernians on their website, and you just know they’ve been tuning the pipes since the Hooley last fall.

This weekend: Rails to the Catskills premiere
Introducing: A Kingston foreclosure hotline