Permanent Verizon cell service comes to Margaretville, with AT&T not far behind 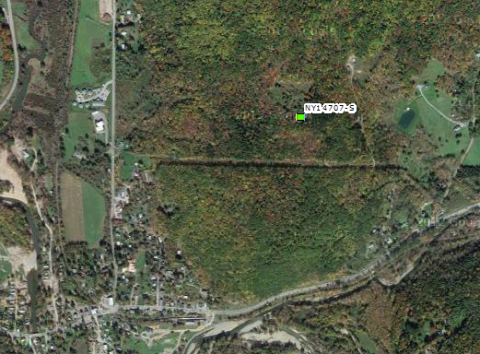 Above: The location of the new cell phone tower in Arkville. Screenshot from SBA Communications' SBA Sites mapping tool.

A new cellphone tower in Arkville is live and broadcasting Verizon 4G LTE service across the village of Margaretville and the rest of the town of Middletown, according to a press release issued today by Governor Andrew Cuomo.

The town of Middletown has had Verizon cell service since the fall of 2011, thanks to a portable cell phone tower on a truck bed that was brought to the village to provide connnectivity in the aftermath of Tropical Storm Irene.

Last fall, according to the Catskill Mountain News, a Florida company called SBA Communications built a permanent cell tower on a piece of land off County Rte. 38 in Arkville that is owned by Peter Molnar.

SBA has leased space on the tower to Verizon, and plans to lease space to Verizon's biggest competitor, AT&T, this spring, according to a February article in the Catskill Mountain News.

That means that a town that had zero cell reception in 2011 will now have signal from the nation's two biggest cell carriers in 2013. Talk about progress.

To read the full press release from Cuomo's office, see below:

Governor Andrew M. Cuomo and Verizon Wireless today announced the activation of a new cell site in the Village of Margaretville, bringing permanent Verizon Wireless service to the area for the first time. The new site will provide wireless voice and 4G LTE data service to residents, businesses, first responders and visitors in Margaretville and the surrounding area. It replaces a cell-on-light-truck, or COLT, that had been in place since the aftermath of Hurricane Irene in August 2011.

“This new Verizon Wireless cell site in Margaretville is welcome news for local residents and businesses as they continue to rebuild after the destruction caused by Hurricane Irene more than a year ago,” Governor Cuomo said. “Verizon Wireless is providing essential telecommunication services to enhance the operations of businesses and lives of consumers in the community, and I thank the company for their continual investment in Upstate New York.”

“The COLT provided vital wireless connectivity in Margaretville in the days, weeks and months following Irene, aiding in the recovery efforts and helping local residents and businesses stay connected as they rebuilt their community,” said Chris Felix, president of the company’s Upstate New York Region. “This new site will ensure those same customers continue to have access to the latest and most reliable wireless services, including our best-in-class 4G LTE network.”

The new Margaretville site will give local residents and businesses the ability to use the latest wireless devices – including smartphones, tablets, smart accessories, and machine-to-machine devices – to access the Internet; manage their lives and businesses more efficiently; download photos, music and apps; and explore social media and other entertainment options.

A new Verizon Wireless cell site was also activated last February in Prattsville, another community that experienced heavy storm damage. Together, the two sites represent a $1 million investment by Verizon Wireless to enhance wireless service in these areas following the devastation of Hurricane Irene.

Two years after its launch, the Verizon 4G LTE network is available to more than 273 million people across the U.S. – close to 89 percent of the U.S. population. To learn more about the Verizon Wireless 4G LTE network, please visit http://news.verizonwireless.com/news/2012/12/verizon-wireless-4G-LTE-two-year-anniversary.html. For a full list of 4G LTE markets please visit www.verizonwireless.com/lte.

Full disclosure: Lissa Harris, the editor of the Watershed Post, is a shareholder in the Margaretville Telephone Company, which worked with Verizon to bring the temporary cell service to Margaretville. The business was founded in 1916 by Harris's great-great-grandfather, John Birdsall, and remains in the family. Harris is not employed by the company or involved in its management. More info on MTC's involvement with bringing cell service to the area here.