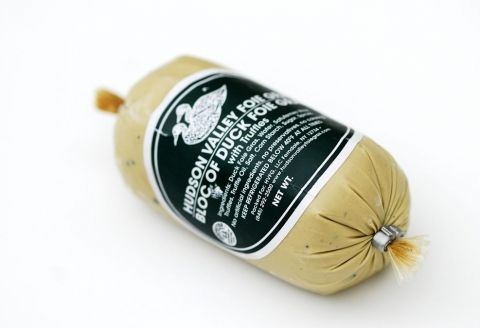 The campaign against foie gras just got a lot more personal.

In the U.S., just two farms produce the fatty delicacy, both in Sullivan County. Last week, a group of anonymous animal-rights activists affiliated with the Animal Liberation Front hacked into the website of the country's largest producer, Ferndale-based Hudson Valley Foie Gras, and published a list of the names and addresses of hundreds of customers.

The news of the hack, first reported by the Orange County Register, quickly spread through the national food blogosphere: The story has made headlines in Eater, The Huffington Post, The Daily Meal and more.

The activists also claimed to have seized credit card information -- a claim Hudson Valley Foie Gras refuted, in an email sent to customers about the hacking:

Hudson Valley Foie Gras's website was shut down Monday and Tuesday, April 22nd and 23rd. An animal rights group took credit for the attack. Some of our customer's names, addresses, credit card types, billed amounts and email addresses were posted on a website: www.negotiationisover.net. We use Authorize.Net for credit card processing, which provides security for credit card transactions. It is our understanding credit cards are not compromised.

This criminal action has been reported and is being investigated by state and federal authorities.

We believe the posting may result in some of our customers being contacted by email and encouraged not to buy foie gras. If you have any questions regarding our farming practices, please call us. Many of you have visited us and know the animals at our farm are well cared for.

We regret any inconvenience to our customers and friends.

A few of Hudson Valley Foie Gras's customers have left messages of support for the company on their Facebook wall. One writes:

Got your email about the attack recently. I'm on the list and I'd like to tell you that I'm proud to be there. Keep the good work, thanks!

Hudson Valley Foie Gras's customers in California, where the sale of foie gras has been banned since July of 2012, are under particular scrutiny from the animal-rights world. Immediately after news of the hack went public, the San Francisco-based Animal Legal Defense Fund wrote a public letter to California Attorney General Kamala Harris, urging her to issue fines against Hudson Valley Foie Gras for selling their wares to about 250 California residents. From an Animal Legal Defense Fund statement:

"Hundreds of thousands of ducks suffer immensely in the cruel process of force-feeding," said Stephen Wells, ALDF executive director. "At a time like this, we cannot afford to be subsidizing rich out-of-state corporations by ignoring the money they owe this state. We hope Attorney General Harris will act on this information, which indicates Hudson Valley Foie Gras has intentionally disregarded California law."

The Animal Legal Defense Fund and a vegan pate maker, Regal Vegan, have been embroiled in a lawsuit against Hudson Valley Foie Gras in federal court since last year over the Sullivan County producer's 'humanely raised' claims on product labels. Recently, a federal judge in San Francisco ruled that the case could proceed, but that only the business competitor Regal Vegan had standing to bring the lawsuit.

The owners of Hudson Valley Foie Gras have long maintained that their farming practices are humane, and have welcomed the public and journalists to tour their farm and observe the process of force-feeding. In 2009, the Village Voice ran an in-depth feature story on foie gras production. Reporter Sarah DiGregorio was prepared to be horrified by her visit to Hudson Valley Foie Gras, but she wasn't:

Henley then took me to watch the oldest ducks get loaded into a rolling cart bound for the slaughter room. They waddled to the front of their pens and regarded us curiously. The birds that finished their feeding regime yesterday were the ones being loaded up for the big goodbye, while the others, who were on day 21 that day, were being fed.

The room is lined with four rows of pens that run lengthwise down the barn. There were 11 ducks in each four-by-six-foot pen, which are raised about a foot off the ground; wire mesh forms the floors of the pens, so that duck waste can fall through it into the channel beneath. The place smelled funky, and faintly of ammonia, but not overwhelmingly so. So far, the sights could not have been more different from the horrifying images I'd seen on the Internet.

After an extensive tour of the farm, and consulting with several farm-animal welfare experts, DiGregorio concluded that foie gras production doesn't rely on animal torture:

If I had seen with my own eyes that Hudson Valley produced foie gras by abusing ducks, this article would have turned out very differently. But that just wasn't the case.

Below: A video produced by Hudson Valley Foie Gras about their duck-raising practices.