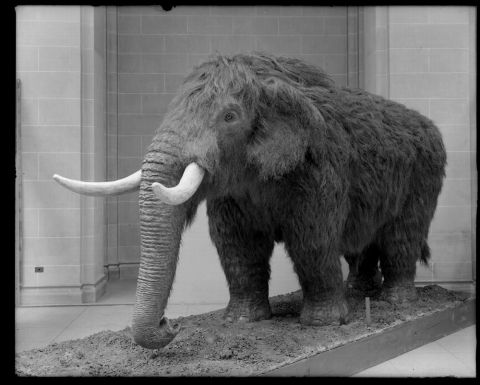 Above: A furry replica of the Cohoes Mastodon, whose skeleton was discovered in 1866 in Cohoes Falls, NY. The Cohoes Mastodon's bones are a jewel in the New York State Museum's display collection; the furry reconstruction in the photo above is on display at the Cohoes Public Library.

Scientists have known for a long time that both mammoths and mastodons once roamed across New York State. But thanks to a study recently published by New York State Museum researchers, we now have evidence that they coexisted.

The New York State Museum announces the results, and explains why they're important:

This research may help scientists to better understand how the modern ecosystems of New York formed. Ice covered almost the entire area of the state during the height of the ice age about 25,000 years ago. Ice age mammals, such as mastodons and mammoths, could only enter the region after the ice melted. The timing of the migration has been uncertain. The scientists hope their continuing research may show a pattern of how animals established themselves and which ones came first.

For the study, paleontologist Robert Feranec and glacial geologist Andrew Kozlowski took bones from seven mastodons and three mammoths in the Museum's collection, and used radiocarbon dating to determine approximately when the animals lived. Several of the specimens had been radiocarbon-dated before, but in the study, the researchers say that new techniques in carbon dating and sample preparation have allowed them to get more precise and accurate results. Other specimens had never been carbon-dated.

Feranec and Kozlowski found that the animals in the collection lived between about 12,000 and 15,000 years ago. Two specimens found in Wayne County -- a mastodon found in Newark and a mammoth found near Clyde -- had very similar dates. The Pirrello Mastodon, a partial skeleton found on the Pirrello celery farm near Newark, dates to about 9750 BC. The Clyde Barge Canal Mammoth, known only from a tooth found during the excavation of a canal lock, dates to about 9800 BC.

The dates are approximate -- give or take a half-century or so -- but they point toward a historical overlap between the elephant-like creatures in New York State.

At least one was from the Catskills region: The Ellenville Mastodon, whose skull is now on display at the State Education Building in Albany. The Ellenville animal is one of the more recent ones in the collection, clocking in around 8900 BC.

Below: Feranec and Kozlowski's study, published in the most recent issue of the journal Radiocarbon.

New report: Almost half of households in NYS (and Catskills) struggle to pay the bills

Cicadas on the march