Things that go flap in the night 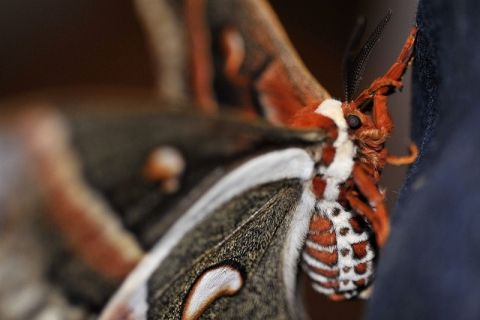 There have been reports that Mothra has invaded the Catskills – well, not exactly.  Godzilla’s classic movie monster nemesis hasn’t come rampaging through the Catskills, but it seems the closest thing has. This photo, taken in Bovina, shows an eye-catching female cecropia moth.

With a wing span of almost six inches, the cecropia is the largest moth in North America. The cecropia has swirls of burnt orange and cream bursts across its wingspan, and dramatic grey and black eye-like spots. But don’t blink if you want to get a view of these beautiful insects: The adult moths only live for a week or two and tend to only come out at night.

The moth, which is also referred to as the robin moth, has no mouth and therefore doesn’t eat as an adult. Instead, the cecropia focuses its energy toward the finer things in life -- finding a mate, breeding and laying its eggs.

In late May or early June when female moths emerge from pupation, they emit a powerful pheromone that is designed to attract male cecropias to them in a timely manner. The males have large, feathery antennae that allow them to smell the pheromone from up to a mile away. Once together, the moth’s courtship only lasts a few hours before the female will find a suitable plant to lay almost 100 eggs.