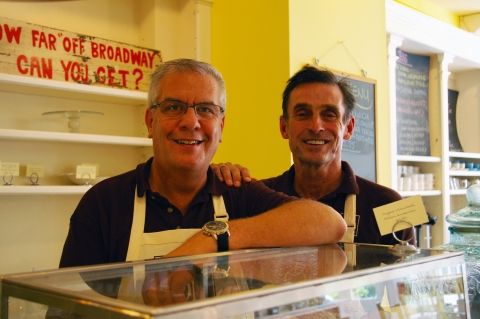 When John Schulman and Scott Finley were deciding on a name for their soon-to-be-opened café, one option in particular immediately stuck.

“We just kept saying ‘tart,’ ‘tart,’ ‘tart,’ and then Scott said to me ‘you’re an old tart’ and the minute he said it we were both like ‘that is it!” John said. “It just makes you smile.”

The café, which opened in just over two weeks, might have had an expedited grand opening, but its coffee drinks and baked goods have been a hit for not only the residents of Bovina, but people from across the Catskills.

Watershed Post:  So, you said you had to open the store in 16 days. What was that like? What did you have to prepare in order to open?

John: Jeez, painting the tables, trying to merchandise – and we’re not even there yet. We had a plethora of things to make this place ready to open.  We tried to stock the shelves, but because we opened so quickly the shelves have sold out.

Scott: Getting over the fear of using the espresso machine! [laughs] We had to learn all of the equipment. Especially the ovens, because you know, ovens each have their own idiosyncrasies. You have to play around with it for a while.

WP: What do you envision Two Old Tarts being?

John: We really wanted to create a space where people could just hang out.  I love listening to music on vinyl, and we wanted it to be a different kind of place where you could just pick what you like and put some music on. We also have a back room lounge – that was actually my family room growing up – and I wanted to recreate that here. We want people to feel comfortable and be part of the charm.

WP: Why did you decide to open up a café?

John:  I had been in corporate fashion for most of my career and when I turned 50 I was commuting back and forth to Los Angeles every other week, so I wanted to be here full time. We wanted to figure out something we could do that would let us earn a living – no one here is looking to get rich [laughs].

Scott: For me, it was the baking. Part of meeting John, I would go to someone’s house and instead of bring wine or something, I would bake something and people loved it and shortly thereafter I decided to start a business that sold baked goods. Soon enough, I started taking continuing education courses to get over the fear of producing something in mass quantities. We had a name called ‘Sweet Sensations.’

WP: Why did you decide on Bovina as a place for your café?

John: Once we came in here for the first time, both Scott and I saw the potential, and it just had the right feeling. We both simultaneously agreed this was it.

Scott: Not only the charm, but it had everything we needed already here. If we were to do this in Andes, we would have had to buy all of this equipment.

John: It was a big economic advantage to have all of the equipment already here.

WP: What have been some of the reactions of people coming in for the first time?

John: I think people are most of all are just happy that this is open. People seem to really love having a bakery because they are so rare. They have all said they really love the name and want t-shirts. Overall, the reaction has been incredibly positive. But we hope people are honest with us, because if there is something they don’t like, we can’t change it unless we know about it. We are really encouraging feedback – even if it’s negative. 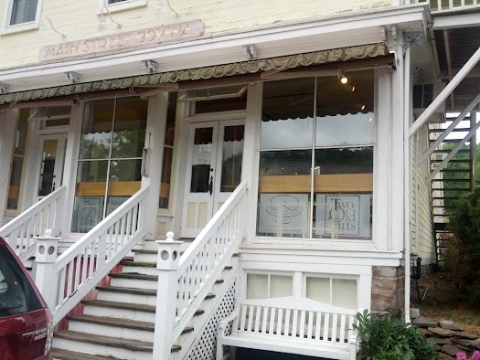 Brew in Rock Hill: Coffee by day, beer by night