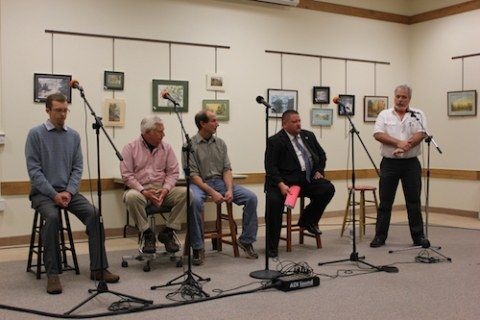 Above: Five candidates face off in an October 23 debate for two open seats on the Sidney town council. Photo by Jason Dole.

Editor's note: This story, which is running roughly two weeks after the event it covers, came in shortly before Sandy was due to make landfall on the East Coast. Rather than take time out of our preparations for live Sandy coverage, we opted to hold it until closer to the election. -LH

Think that political debates are about duking it out over the issues? Then you missed the the Town of Sidney five-way town council debate on Tuesday, October 23.

Sidney is divided by contentious political issues. Its town meetings have a reputation for being loud and antagonistic. But when the five men seeking two town council seats met at the Sidney Memorial Library, everything was calm. At least on the surface.

Moderator Sam Pollack, editor of the Daily Star, asked questions submitted by the audience of nearly 60 folks and the room was silent as the candidates responded in turn. Each was polite, restrained, and respectful of his time limit. If one mentioned another by name, it was only to agree. In fact, the candidates rarely availed themselves of allotted rebuttal time at all.

The candidates largely agreed that growing local employment is one of the most important issues facing Sidney. They agreed that town board meetings need to be handled differently.

But when questions touched on the Constitution Pipeline and natural gas drilling, divisions appeared, and the candidates' measured answers started sounding a little more like a debate. It's a topic that has been the focus of fierce controversy in the town: The town's largest employer, Amphenol, has publicly declared its opposition to any town law that seeks to regulate gas drilling, fearing that a town ban or moratorium on drilling could impact the Sidney manufacturing plant's ability to access cheap gas.

“The public has the right to put in their two cents as to what's the best route for the community," Schaeffer said.

For Gregory “Greggie” McCann Jr., it was a question of majority rule.

“I don't want to see anyone's property taken for it, but you can't just put one person in front of the whole community," he said. "We have to move forward and get into the 21st century.”

Eugene “Gene” Pigford gave a nuanced response weighing the benefits of eminent domain against the rights of property owners. William “Bill” Heath said the Constitution Pipeline would be a poor reason to use eminent domain, and Tobias Whitaker stood staunchly opposed.

“Is there anything more invasive than having the government say we're going to take your property for corporate profits,” asked Whitaker. Then, in one of the few statements directed at another candidate's remarks, he added, “I think it's more than one person that would be against it.”

The five men mostly stuck together along party lines. Republicans Schaeffer and McCann reiterated their lack of an “agenda,” with Schaeffer warning against the town prohibiting any one industry and McCann emphasizing his dedication to majority opinion. Democrats/Sidney First Independents Whitaker and Heath touted green energy for job growth and alternatives to natural gas, with Heath saying that the issue of natural gas bringing jobs to the area is “tearing people apart... with friends and neighbors at each other's throats.”

Gene Pigford is running alone on the Authenticity line. His answer to most questions was that Sidney needs to revisit and update its 2002 Comprehensive Master Plan.

In a couple of key responses, Gregory McCann echoed Heath & Whitaker. He turned a question about ethics violations on the town board in to an opportunity say that “everybody has to be treated like an adult... with some of these meetings it's like yelling and screaming for an hour.”

Republican John Schaeffer responded to a question about using home rule to oppose fracking by saying the town should stay clear of the issue.

But fellow Republican McCann had a different take on the issue.

“I totally agree with home rule," he said. "Whichever way the people want, for or against fracking, that's the way my vote would go.”

While Whitaker called home rule “democracy at its best,” he cautioned McCann that “you can't have home rule and also support eminent domain.”

McCann and Whitaker found themselves on the same page again in a closing question about the Sidney floods. While all five candidates reflected on the inspirational way the community came together in the face of adversity, Whitaker and McCann made separate points to the effect that togetherness is what Sidney needs the most right now.

The Sidney Bi-Partisan Coalition, a group that seeks to pass an anti-gas drilling town law and is supporting Whittaker and Heath, took video at the debate. The footage is available in three parts on YouTube: Part 1, Part 2, Part 3.