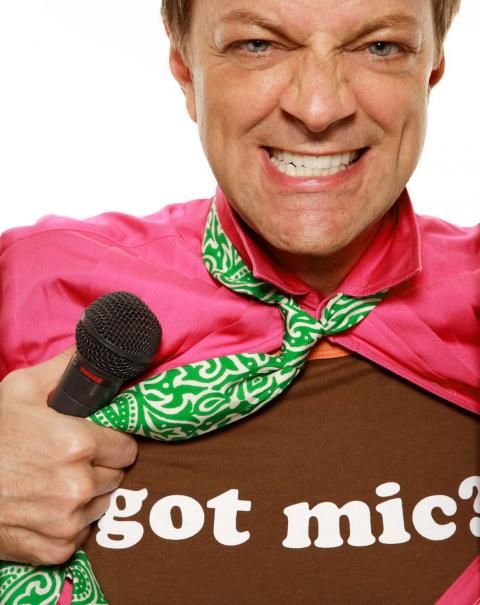 This Friday, Cast Party, a weekly cabaret and variety show that usually spends its Monday nights entertaining crowds at the legendary Manhattan jazz club Birdland, is coming to Belleayre for a little Borscht Belt nostalgia.

Veteran emcee Jim Caruso (above) -- a bud of Liza Minnelli's, who sometimes drops by -- and veteran pianist Tedd Firth will man the stage as a procession of towering Broadway talent performs alongside talented local Catskills artists. Donna McKechnie, who inspired the musical A Chorus Line, will rub shoulders with MARK Project director Peg Ellsworth while singer Sally Mayes will exchange the mic with 13-year-old Mackenzie Wright. For a full list of the acts, see the Roxbury Arts Group website.

Cast Party's night in the Catskills is part of a weekend of Broadway glitz organized jointly (a first!) by the Roxbury Arts Group and the Belleayre Music Festival. The night after the cabaret, Broadway directory and choreographer legend Tommy Tune will take the stage with The Manhattan Rhythm Kings.

We called up Jim Caruso last week and got him to dish about cabaret, coaxing good performances out of anybody, and coming to the Catskills. Here's our interview below:

Q: Why the Catskills? Have you ever been up here before?

A: You know, I was out there 15 years ago, but I think that was before my constant obsession with being online and being connected. But that's why people come up there, right?

Q: Tell me about Cast Party.

A: It’s crazy. We get these extremely talented people, mostly because the musicianship is unbelievably high. Because I have Tedd on the piano and Steve Doyle on the bass.

Q: Monday night is usually a Broadway performer's night off. Why do they spend their Mondays singing with you?

A: There's a psychological issue going on there that makes people want to go out and sing on their night off. Many people here in town are  in the ensemble of a show and don't ever really get the chance to break out and sing their heads off.

Q: Tell me a little about the line-up -- who are you particularly excited to see onstage at Belleayre?

A: Donna McKechnie, she’s the real thing. She starred in A Chorus Line on Broadway -- the character of Cassie was kind of based on Donna. She’s kind of a Broadway legend. She’s a big deal, Tommy Tune’s a big deal. We’re going to have a blast.

Q: Will Liza Minnelli be a surprise guest?

A: She comes in quite a bit. It's her fault that all this started. I was living with her in Los Angeles, and she would have parties every Saturday night, and all her friends would end up around the piano.  Now, her friends on the piano happen to Barbra Streisand and Rosie O'Donnell. My head was exploding.

Q: So you decided to bring this spirit to New York City?

A: I was doing PR for a defunct nightclub, and I thought I’d throw a Christmas party. Everybody came; everybody ate and drank, and then we went to the piano and sang until four in the morning. The next day the club called and said, "Would you do that every week?" I said no, and here we are, still doing it.

Q: Cabaret is a step up from vaudeville, right? Tell me about it.

A: I always say it’s very hard to make a living in cabaret. Amish people make more money than cabaret people do. It's "I have a microphone, let's put on a show." It’s such a precious, odd little entity in show business -- people singing standards from 50 years ago. I don't feel like it's ever going to be mainstream, but that's what makes it special. We’re not singing Mariah Carey tunes -- that’s sad that that’s the most current musician I can think of -- and we’re not doing Jay-Z. And we never will. It would be unattractive on a woman in sequins.

Q: I hear you’ll have a 13-year-old from West Kortright named Mackenzie Wright performing. Will she steal the show?

A: That’s part of the fun, too. This is not just 40-year-olds who have a song to sing. We’ve had 87-year-old tap dancers; the little girl who was on the first year of "America's Got Talent" used to come to Cast Party. It's like the Ed Sullivan Show: Rhere would be the Beatles, and then a puppet, and then a juggler, and then Barbra Streisand.

Q: On working with the locals -- how do you coax the razzle-dazzle out of them?

A: We’ve been doing Cast Party all over the country, which is really exciting. It’s really nuts and bolts grassroots show business. We’ve been doing it in Los Angeles, Chicago, Orlando, Austin, and there is extraordinary, mind-blowing talent everywhere. Some of the greatest singers I've ever heard have been in these Cast Parties on the road. Our minds are constantly blown. So I’m expecting great things.

Q: Will you be including any Borscht Belt flourishes on Friday?

A: I’ll do some songs, but my material isn’t like old-timey. It's standards -- maybe it’s "neo-Borscht Belt." There’s a sense of history to this, and kind of like an old-timey thing, but I do think it has a refreshed vibe. There is nothing creaky about Tedd Firth. He can make the most mediocre person sound like a superstar. That's when it becomes kind of otherworldly: how [good musicians] can raise people to another level. Giving someone a stage to perform on, and letting them tell us who they are -- it's very powerful. I love every second of it.