Twelve months of farming in the Catskills 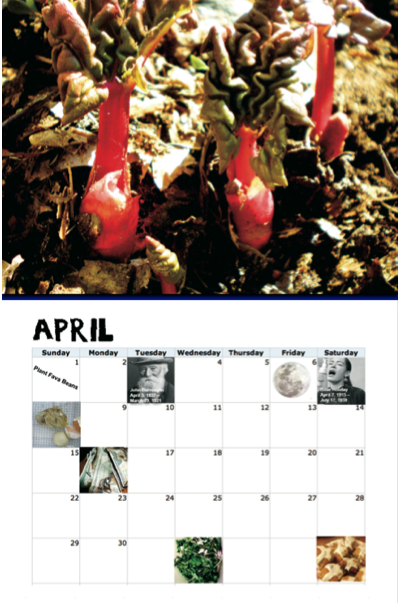 Farming in the Catskills isn't easy. There are few amber waves of grain of the kind depicted on your average bank calendar in our rocky hills.

So Madalyn Warren and Tovey Halleck, who manage a farm in Roxbury along with a project called the Andes Sprouts Society in Andes, worked with DeeDee Halleck, a Woodstock-based videographer and activist, to commemorate a distinctly-Catskills brand of small-scale agriculture in a calendar of their own.

The calendar's scene of a maple syrup spigot in March and the bravest of new spring shoots in April will look familiar to anyone who lives through "mud month" in the Catskills.

Here's what Madalyn tells us about the calendar:

The Sprouts Farm Calendar was made in response to one that the National
Bank of Delaware of Roxbury was giving out last year. Their entire calendar
was photos of huge agra-business acres of monoculture corn, potatoes, etc.
The flat Mid-West fields seemed inappropriate for our Catskill community.
So we decided to make our own calendar of this region. Originally we were
going to highlight all the small local farmers, but so many were in such
ruin after Hurricane Irene , we thought it would be very depressing if all
the pictures were of the flooded acres.  So we concentrated on the farm
closest to us: that of Tovey Halleck and Madalyn Warren. If people want to
order one ($10 plus $2 shipping and handling) go to
http://andessproutsresidency.wordpress.com/

Check out a few of the calendar's other months below, or see the whole thing here. 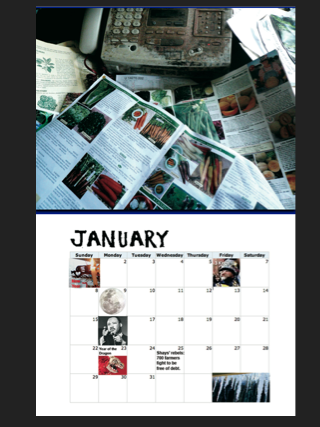