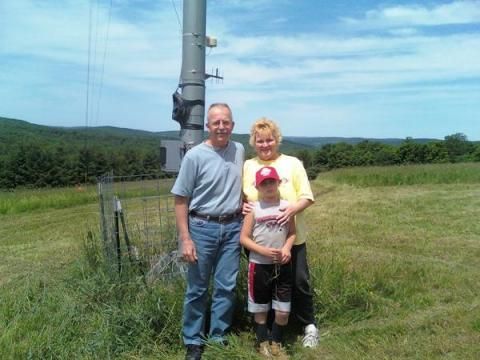 Louis and Trish Pesout, with grandson Skylar Pesout, in front of a test wind turbine on their property in Franklin. Photo by Lillian Browne.

Wind power is coming to Franklin. A Houston-based energy company, Horizon Wind Energy, has erected two wind test towers in the town, with an eye toward eventually building a 16-turbine, 50 megawatt wind farm on yet-to-be leased acreage within town borders.

One of the test towers, known as a meteorological tower (or "met" tower), is located on the property of Louie and Trish Pesout on Olive Whitbeck Road. The Pesouts signed a land lease agreement with Horizon in 2009.

The Pesout test tower is unobtrusive, standing 195 feet in height and resembling a wide flagpole. It is held in place by 24 grounded guide wires. A visit to the Pesout property on Sunday, June 19, revealed a steadily blowing wind at the site of the test tower. The test tower is not currently visible from town or county maintained roads in the area.

The Pesouts welcome the development of wind turbines in Delaware County as a step towards American energy independence and a preferable alternative to hydraulic fracturing of natural gas.

“We need to be a nation of producers instead of a nation of consumers," said Louie Pesout. "We are being held hostage by foreign nations and by our own corporations. We have the power to change that.”

According to Gary Davidson, a Regional Project Manager at Horizon who manages wind projects in the Northeast and mid-Atlantic, the Franklin test sites were selected based upon available mapping data and community receptiveness. The Town of Franklin passed a law regulating wind power installations in 2007.

Horizon does not currently have all the property it needs to move forward with its longterm goal for Franklin: A 50-megawatt wind farm.

"But, the reception we have had is promising that we could get there," Davidson said. "In the meantime, since I first set foot in Franklin, things have slowed down economically nationwide; so we haven’t been as aggressive about that effort as we initially were.”

That could change, however, with a rebound in the economy or energy sectors in particular.

Davidson continued, “We are prioritizing and assessing our internal resources and trying to focus them where we have more near term prospects. At this point, Franklin is a longer term prospect. We don’t anticipate constructing anything for about five years.”

Because of changes and advancing technology, Davidson said, what started out as 32 wind turbines, can now be successfully completed with approximately 16 turbines.

Horizon intends to lease between 5,000 and 7,000 acres in Franklin. Of that acreage, only 1 percent to 3 percent would actually be used to host the footprint of the project, Davidson said. Horizon is currently negotiating a second round of contracts or land lease agreements with property owners in the area.

Getting the leases will be just the beginning for Horizon. Detailed studies of a project's impact on birds and wetlands are required by regulatory agencies such as New York State Department of Environmental Conservation. The town of Franklin has required a $10,000.00 bond from Horizon Wind Energy for each of the two test towers, to be used in the event that the test tower is abandoned and it needs to be removed.

Wind turbines have been the subject of controversy throughout the Catskills, especially in the Delaware County town of Meredith, where a recent documentary, Windfall, chronicled local resistance to installing turbines. Resistance to turbines has cropped up from Andes to Stamford.

A few landowners living near Franklin are skeptical of turbines.

Chris Rosenthal, who owns 70 acres on McKee Hill Road in East Meredith, is wary of promises made by wind energy companies.

"One of the most important drawbacks with wind power has been the lack of responsible actions on the part of the companies who install the large turbines," Rosenthal said.

Barb Klopping, who owns over 100 acres off of Pines Brook Road in Walton, said "I have mixed feelings about it, as I have seen wind farms that are beautiful, purposeful and do not seem to disturb the environment. [But] I have also seen farms that are obstrusive, loud, not well located and industrially ugly, harming the environment and communities it encroaches upon."

But with the development of hydraulic fracturing technology and the subsequent natural gas rush in the Marcellus Shale, the politics of wind power have taken a backseat to the current fight over fracking. Both Rosenthal and Klopping consider wind energy to be less harmful than hydraulic fracturing. Klopping calls it "less threatening" than fracking, and Rosenthal calls wind energy "the lesser of two evils."

Meanwhile, high energy prices and a declining local economy have quietly convinced some Catskills towns, like Franklin, to give wind power a warm welcome.

“Typically, the wind in New York is not quite as strong as in other parts of the country such as the Midwest," Davidson said. "But because of the current [economic] market, it makes up for the slightly less robust wind.”

As in fracking, wind power comes with lucrative lease agreements for landowners and large financial incentives for local municipalities, which hope the industry will come with new jobs, cheaper energy, and lower taxes. As with hydraulic fracturing, there are negative side effects as well: Noise pollution, negative environmental impacts on birds, increased pressure on roads, and a possibility of decreasing property values have been cited at wind farm locations throughout the United States.

Of the negative effects of the turbines, Pesout said, “I don’t find the windmills to be visually offensive. They are gentle giants.”

But Pesout is not completely satisfied with the amount of information being provided by Horizon. He said that the company has not responded to his request for a site plan for construction of a turbine on his land.

That may not be an issue that Pesout, or any other property owner, needs to battle alone. Planning and zoning codes are in place regulating the permitting process that could help to protect the property owner.

Despite his concerns, Pesout is a firm supporter of wind power, which he sees as preferable to natural gas drilling.

“I am 100% in favor of the project, even if I elect not to become part of it," he said. "I have my cake one way or another, this would just be the icing on the cake.”

Franklin isn't the only Delaware County town to explore wind power. The town of Walton, which borders Franklin, has issued a permit to Northwind-Ridgeline Power for the erection of a test tower on the Tordella property located off of South River Road.