Streambank failure on the Beaverkill 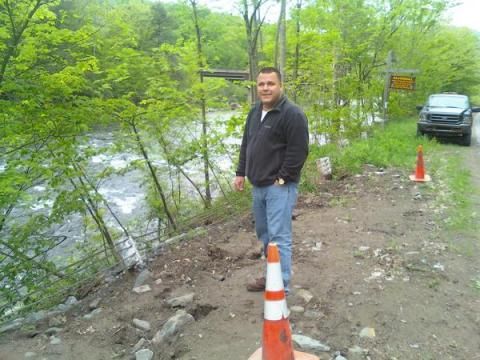 Town of Colchester Highway Superintendent Kenneth Eck Jr. at the site of a streambank failure on Cooks Falls Road. Photo by Lillian Browne.

The Beaverkill, a famous fly-fishing stream that runs through lower Delaware County, is gaining a reputation for slope failures along its banks. Officials in the town of Colchester are particularly worried about a spot approaching the shoulder of the Cooks Falls Road, just before the intersection with Old Route 17. Erosion from recent floods has caused the bank to slide, threatening the road. The situation could require the town to make some very costly repairs.

Colchester Highway Superintendent Kenneth Eck Jr. says his road crew has been monitoring the bank since the spring thaw. “We thought it was due to a bad winter. We thought it would settle,“ he said.

The Town of Colchester Highway Department made its first attempt at temporary repairs on April 1st, setting drainage stone and gravel on the spot and re-setting the guard rails. But the repair didn't improve the situation much. “We put material in the hole and within an hour, it settled over six inches,” said Eck.

Since April 1, the highway department has been monitoring the bank failure two to three times a week. The bank has settled at least another six inches, and the guard rail has moved over the embankment a little more than six feet.

“It seems like every rain storm we get, it settles more. If we have a flood situation it will be totally taken out,” Eck said. “There is no hazard to motorists at this point, but with a big flooding situation it could rapidly materialize into an issue there.“

Eck says he will be exploring options with Wayne Reynolds, Delaware County Public Works Commissioner, to try to stabilize the bank from behind. “We have to determine whether we should drive piles, dig it out, remove trees or something else to lessen the weight [on the river bank].”

The county Department of Public Works is experiencing its own streambank problems not far from the bank failure in Cooks Falls. About an eighth of a mile upstream from Colchester’s problem, repairs to a retaining wall are visible. And about a mile downstream, Delaware County has removed trees from the stream bank to reduce the load in an attempt to prevent further erosion.

Eck estimated that costs could be anywhere from $500,000 upward, although he stressed that the town would have to consult with an engineer to get a firm estimate of what needs to be done. The town has not budgeted money for the repair.

Lillian Browne is a farmer, writer and self-described adventure seeker who lives with her husband and three daughters in Walton. Browne covers town meetings for the Walton Reporter and pens a column, "Foible in the Fairytale," for the Delaware County Times.