Shandaken wants you back 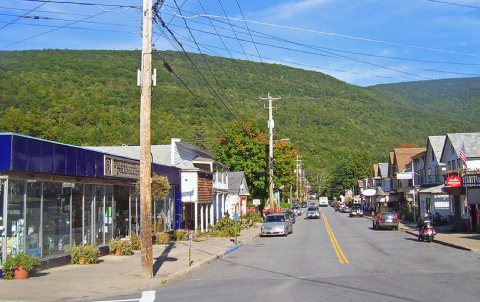 In this case “you” refers to anyone who periodically enjoys spending time -- and, preferably, a little money also -- inside Shandaken. With only a few exceptions, the town is open and ready for business, and, to be honest, it could use a little more of that right about now.

It seemingly is a little-known fact that almost the whole business district of Phoenicia reopened two to three days after Irene’s departure, quickly emerging out of clouds of dust kicked up by shopkeepers, road crews, and many a volunteer’s broom, all pitching in to restore a semblance of normality to the hamlet.  Backhoes and bulldozers filled the parking lots, driveways and alleys that bore the major brunt of Phoenicia’s flash flood surges. When Sweet Sue's happily reopened this last Sunday, the Main Street recovery was essentially complete.

Meanwhile Pine Hill had it even easier than Phoenicia, since almost no damage happened there in the first place. Along Route 28 throughout Shandaken, very few businesses took much in the way of a flooding hit. Though Boiceville at one border and Fleischmanns at the other both suffered some serious commercial-district flooding, the Town of Shandaken mostly escaped.

Destruction inside Shandaken was centered in a handful of low-lying residential areas. While many roads and bridges did suffer damage, with the exception of Oliverea and Fox Hollow, main travel routes and transportation both to and through Shandaken was restored to most everywhere within a week. Though some of the fixes made were temporary, and will need more permanent upgrades, the fact remains; Shandaken is back and wants you back too.

Irene, and all of the post-Irene flooding that followed, seized the public’s collective attention span for a solid week or more. All for good reason: Throughout the Catskills there are still some notable spots where a full recovery will stretch into months, and in some cases more than just a few of those. Many people still need significant help getting back on their feet, and our thoughts understandably remain centered on them.

In some ways that obscures the fact that, for most of Shandaken, Irene is as over now as any other storm that passed through our way this summer, except that Irene had the added effect of washing away the Labor Day weekend, canceling out much of the tourism that usually comes this way with it.

With the advent of a 24-hour cable news cycle, not to mention the Weather Channel, many Americans (me included) are becoming de facto disaster junkies. I now take it for granted that somewhere, something awful is always happening that will uproot the people who live there for months, if not years.

The media gave Irene the extended super-storm treatment, and that was warranted. But Irene was not at all like Katrina’s drunken swagger, which left a wide swath of destruction. Irene’s punches were sharp jabs to targeted vulnerable points; in and out quickly, the way flash floods tend to be.

That is a shame.  Shandaken, like some other towns here in the Catskills, needs tourism to survive. What Shandaken needs right now is simply a return to normality. Phoenicia was a happening place this summer, and the thing is, nothing Irene did really changes that. (OK, almost nothing; the Esopus isn’t ready for tubing yet.)

Phoenicia, smack dab in the heart of Shandaken, remains one of America’s coolest small towns. Irene is gone, and Phoenicia goes on in its own delightful, quirky way. So please help pass the word: The skies have been blue, the temperature has stayed pleasant, and yes, even the water is fine. It’s a great time to visit Shandaken.