A sewers matter that needs addressing 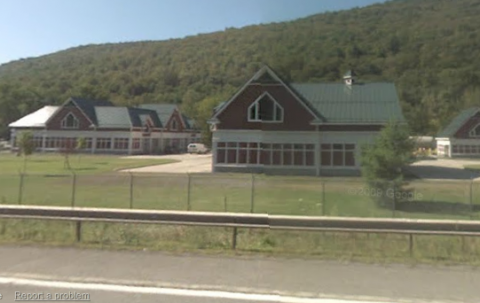 Above: The Pine Hill Sewage Treatment plan on Rte. 28 in Shandaken. Photo via Google.

In news from Shandaken, the Watershed Post reports the following:

"The Town Board agreed to hold a public meeting for a presentation by the Catskill Watershed Corporation (CWC) on the proposed Phoenicia Sewer at 6:00 pm on October 20. Stanley and Councilman Vincent Bernstein will meet with the CWC and engineers from Lamont Engineering to discuss options at some point prior to the meeting."

A lot has happened in Phoenicia since the Shandaken Town Board received the last update report from CWC engineers on plans for Phoenicia sewers: most notably, the flooding caused by Tropical Storms Irene and Lee. That event raises some new questions that it seems should be looked into before any plan is finally settled on. Here are a few that I hope will be addressed at the upcoming hearing.

What most likely would have happened to the Phoenicia sewage treatment system during Irene if Phoenicia water users had approved, rather than rejected, the proposal to build it that was voted on by referendum a few years back? If I recall correctly, the plant was to be sited in a relatively low-lying area. But regardless of where it was built, the sewers would have been inundated by massive amounts of water during the flooding.

Would any raw sewage have been released into the Esopus because of the volume of water the sewage system would have received, power outages, or damage to key components? I don’t know if Phoenicia’s current septic systems released contaminated water into the Esopus. From all I heard at the time, the drinking water in Phoenicia never had a spike in biohazards. Any concerns for it regarded excess sediment and possible traces of fuel and the like in the stream it draws from.

There is a scientific and an economic aspect to this question. Obviously, we all want clean water, for ourselves and other New York citizens, and for the biosphere as a whole. Those of us who reside inside of Phoenicia also want to continue to afford to live here.

Far as I can tell, there has been no adverse economic impact on Phoenicia’s water users as a result of the recent flood events we suffered through. We weren’t hit with large daily fines from the Environmental Protection Agency as the result of our sewage system releasing raw sewage into our region's streams and rivers. We haven’t been saddled with huge capital costs for any repairs to a facility valued at up to $30 million dollars.

Granted, we would not have been left alone to pay the fines and costs associated with the breakdown of our sewage treatment system had it been in place. New York City would have picked up a large majority of those costs. New York City also has a somewhat bigger budget to draw on than do 200 or so Phoenicia water users. Under the sewer plan that was rejected, Phoenicians would have owned the sewage treatment plant that now would cost a couple of dozen million dollars or more to build. With ownership come responsibilities, like liability.

Most of us send a monthly check to County Waste for them to take away our garbage and recycling, but none of us have expressed aa desire to own them. Phoenicia is a pretty small hamlet to even think about owning and running its own garbage disposal company, let alone a multi-million dollar sewage treatment center. New York City has the ways and means to do so. Phoenicia, not so much.

A highway runs through it: Pine Hill's past points to the future

Struggle with death illuminates a life