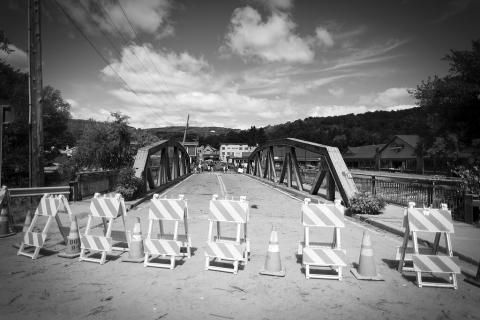 Photo of closed-off bridge to the village of Margaretville, in the town of Middletown, taken August 29, 2011. Posted to the Watershed Post Flickr pool by photographer Christopher Mooney.

Elected officials in Middletown are seeking to keep the town budget for the upcoming year from increasing, despite heavy flood damage inflicted on the town by Tropical Storms Irene and Lee.

A large percentage of what was discussed at last Tuesday’s workshop meeting of the Town Board of Middletown involved residual and ongoing impacts of the flooding.

According to Middletown Code Enforcement Officer Pat Davis, as of Oct. 4, 98 percent of the roads in the town were up and running and 98 percent of flood debris had been removed. During flood cleanup, more than 4,000 tons of flood debris were amassed at the temporary Crossroads dump site in Arkville, most of which was material from homes and the majority of which was transported to the Seneca Falls landfill.

Town Supervisor Len Utter said that, overall, he was pleased by the town’s handling of the disaster, referring to the amount of water as “almost unheard of.”

“I think we did the best we could,” he said. “I think we came out pretty lucky. But we’ll look at this and see how we can improve.”

A number of suggestions were made as to how to mitigate and address future issues, including investing in a municipal web site and appointing a public information officer to act as a liaison between the town board and the public.

Davis also touched on the ongoing enforcement of the town’s flood laws and the importance of rebuilding damaged structures with permits and approval, according to flood law requirements. Flood law is required in order for FEMA assistance and, according to Davis, flood insurance rates nearly double for each foot a structure is not above the level of the 100-year floodplain.

“I’d say we are at the end of the recovery phase and at the beginning of the rebuilding period,” Davis said, adding that an estimated eighty percent of structures damaged in the flood are in the process of rebuilding. He also noted that the town is charging the minimum $75 fee for building permits, regardless of costs of repairs.

The board also discussed a Catskill Watershed Corporation flood repair grant program, which has allocated slightly over $2 million to aid Town of Middletown businesses in rebuilding. The MARK Project will administer the grants, which are available for up to $30,000 per applicant.

At the regular town board meeting on Tuesday, October 11, the key issue up for discussion was a tentative budget that was presented to board members at last week’s workshop. As initially figured, the tentative budget showed an increase of 8.9 percent, which Utter deemed “unacceptable,” adding that Gov. Andrew Cuomo and the state legislature have passed legislation that charges towns with limiting budget increases to a maximum of two percent.

Utter originally proposed a 10 percent reduction of all contractual items across the board, which brought the budget down to a 2.7 percent increase, and utilizing $21,000 of the town’s unexpended balance to bring that figure down to 1.9 percent. Following board discussion, however, a motion was made and carried to cut 13.5 percent on all contractual items and apply nearly $35,000 in unexpended balance, to bring the budget increase to zero percent.

Copies of the preliminary budget will be available to members of the public on Thursday, October 13; the preliminary 2012 budget hearing has been scheduled for Wednesday, Nov. 9 at 7 p.m. and will be followed by the board’s November meeting.

Tempers flared briefly when a dispute between Davis and board member Jake Rosa was alluded to; however, the board opted to discuss the issue behind closed doors, carrying a motion to move into executive session.

Rosa is also running for town supervisor as a write-in candidate in the upcoming election.