From Antidote News/Mountaintop Meteor reporter Paul Smart, who visited Prattsville - or tried to -- this afternoon:

In Windham, a town police officer notes that he's heard that Prattsville is toast ... Route 23 is closed between Ashland and Prattsville, at Red Falls. New Ashland town hall/FD building did okay but bridge to it is gone. Prattsville has been closed down... Volunteers outside are saying that something just happened and all that Greene County Sheriff Greg Seeley is letting in are residents, business services and emergency vehicles. I was told O'Haraks is gone and every building has been damaged. Roadway at junction of 23 and 23A is down. But everyone's saying Blenheim got it worse.

Paul Smart also did an interview with WGXC -- listen here.

This comment was just posted on our live blog from Kellie Place:

"Prattsville is devastated. The entire town is apparently condemned. My son saw for hinself and the town no longer exists."

This plea was posted earlier tonight:

Please we need help in the Gilboa, Blenheim, Prattsville area.This storm has devastated the area, and several deaths have been comfirmed What may look passable ON THE ROADS to you is very dangereous as the roads are undermined and travel is diificult.There is no way up here through the Kingston 42 Lexington way as many bridges have washed out. Many roads remain closed. I don't think you can get up to Windham either. If u need to get to this area u can come through the Tacanoic through 82 to 23 to Potter Hollow to 990v crossing the Gilboa bridge by the dam. This will get you to Grand Gorge Roxbury, Gilboa areas.

4:20pm: Prattsville perhaps the worst-hit communty of all the Catskills. News still very hard to come by. Report from a posting on Facebook:

Liz Reynolds: Just talk to Roxanne, everything in pratsville is destroyed she said the pictures don't say the real story every house past the great American is gone the oharas gas station is gone the trailer park gone the bridge is condemned people cant get any where there is a spot just big enough for a four wheeler to pass by for a road its literally wiped off the map

12:30pm: CNN is reporting that 23 more people are trapped in a vacation house in Prattsville. This seems to be a separate incident from the people who were rescuued from Moore's Motel last night:

The 23 people -- including two pregnant women, seven toddlers and three infants -- are now stuck with no electricity, a dwindling supply of food and were down to one gallon of water late Sunday night. "When we heard news about (bad weather) hitting Brooklyn, we thought we had saved ourselves," said Irina Noveck, one of those trapped at a vacation house in Prattsville, New York. "We're sitting in one room, and it's a horrible situation and there is no way out," Noveck said. "(We) called 911, 311, nobody can help. Kids are getting scared, food is getting spoiled." She said the families brought enough food for their weeklong stay, but that week ends Monday. And well water to the house is powered by an electric pump, but now there is no electricity.

Raw video of Governor Andrew Cuomo's helicopter ride over flooded-out Prattsville, Middleburgh, and Schoharie. Widespread, dramatic flooding. Footage via StateofPolitics on YouTube, and here's a still from the video of where Schoharie Creek and the Mohawk River meet:

12:30am Monday, 8/29/11: Photo submitted on our live blog of Truesdell Road in Prattsville today by Kellie Place. See it below. 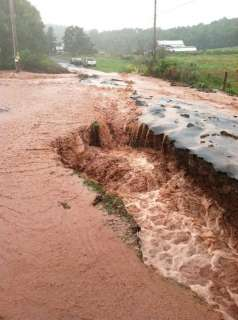 9:30pm: Video of a road to Prattsville blocked, from Deborah Hemstock via Facebook.

9pm: Reuters is reporting that everyone trapped at Moore's Motel and Resort in Prattsville was rescued this evening by the National Guard:

Residents of Moore's Motel and Resort in the small Catskills community of Prattsville became stranded after fast-moving water flooded much of surrounding Greene County, blowing out bridges and roadways.

There were no reports of deaths or injuries at the motel, which has an adjoining campground and trailer park. But the deep water made it difficult for rescuers to reach the property, said Shaun Groden, Greene County administrator.

"This is historical in terms of previous storms we have experienced," Groden said.

3:45pm: 22 people are reportedly trapped by floodwaters in a motel in Prattsville now, awaiting rescue by speedboats, according to Daily Mail reporter Doron Tyler Antrim via Twitter:

People trapped in Moore's motel in Prattsville, but officials say they can't get there.

1:30pm: We don't have much info on the situation in Prattsville, other than this video by Luke Holdridge via Facebook that reports to show the town under several feet of floodwaters. Here's the link.

Prattsville already declared a state of emergency earlier this morning. If anyone has more information, please get in touch with us.