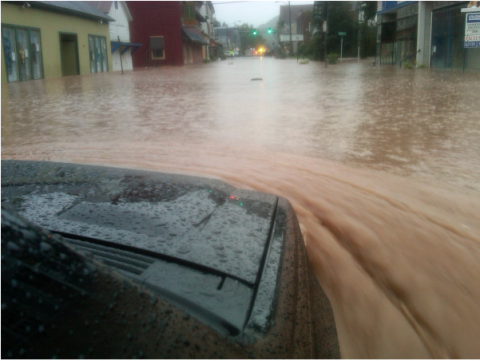 Cleanup begins at the Freshtown and former CVS. Photo by Brian Mulder via Facebook:

Rich Bell, Director of Delaware County Emergency Services announced that a curfew has been implemented in Middletown. It would be from dawn to dusk. “It will be enforced by law enforcement officers and military police,” said Bell. The purpose is to reduce unwanted traffic in the region that has been slowing down clean up work. With the enforcement of the curfew, we can begin getting roads open for emergency access,”said Bell.

Susan McIntyre, Delaware County’s Solid Waste Coordinator, announced that the county has set up two staging areas for Middletown residents to dump their flood debris. They are: in Fleischmanns, at the intersection of State Highway 28 and Main Street and in Arkville, on County Route 28. The Arkville location is the larger of the two. The sites will open tomorrow. The hours of operation for both facilities are 7am-5pm. (They didn’t say what days. No one asked and they left before I could follow-up, so I think it’s daily. They also didn’t say how long the program will last.) For people who use garage pick-up services, the county will waive tipping fees for flood debris for the next two weeks.

Bell said there are now feeding stations at the fire halls in Margaretville and Fleischmanns for flood victims that can feed up to 1,000 people. The county wants to set up a service center to provide flood victims with information on how to get the hep they need.

Jim Eisel, the Chairman of the Delaware County Board of Supervisors introduced the speakers and said “The water level in the streams was 54 inches higher than in ’96.”

The Human Needs Committee of Delaware County sent out this press release of resources today:

Hurricane Irene is over. How can you help Delaware County recover? Donate goods, cash and/or your time.

The following items are needed:

Furniture – call Delaware County Office for the Aging, (607) 746-6333 to leave contact information and what you have to donate. This is necessary due to limited storage space for such items. By leaving your number further arrangements will be made to match your donation with someone in need.

Tons of photos and info on the Facebook Group Hurricane Storys.

11:20am Monday, 8/30/11: Incredible photos of Margaretville devastation by David Rainbird via Facebook:

Also, brave video coverage of the flooding by Amy Metnick from around 4pm in Margaretville yesterday. And another scary video by YouTube user NYryry.

A boil water alert is in effect for Margaretville. Contaminated water can contain microorganisms that cause diarrhea, vomiting, abdominal cramps and headaches. Make F you disinfect sure IRST FLOOR all water before drinking it or using it to prepare food by:

2. Then let the water cool before drinking C.S.H.C.N.

? (Boiled water will taste better if you put oxygen back into it by pouring it back and forth between P.H.C.P.
two containers.
Preschool Program
Family Health Note: *It is safe to shower/shave with unboiled water as long as the water is not swallowed*
Disease Control

According to Delaware County Emergency Services, their biggest priority currently is getting assistance to people in Margaretville, Arkville and Fleischmanns today. Margaretville and Arkville still have no municipal water -- that includes the hospital and nursing home. "We've got a lot of water on hand right now and are working to deliver it to them," a Delaware County emergency responder told us this morning.

Here's a link to a new video of Margaretville flooding.

11:59pm Sunday 8/28/11: YNN confirms what we've been hearing all night: That an Orthodox Jewish woman staying in the Valkyrian Motel in Fleischmanns was killed when the hotel was deluged today. Her body was found by rescuers:

The Delaware County Sheriff's office confirms that a woman in her 70s was killed after while staying in a motel in Fleischmanns. Flood waters reportedly caused the Valkyrian Motel to partially collapse. The victim was later found dead by rescue teams.

The Catskill Scoop is reporting that her name was Leah Stern:

Massive flooding swept through the village of Fleishmann’s New York, (located in Delaware County), after a lake and streams turned a local street into a river. The Valkyrian Motel was caught in the flood, and everyone ran to safety. Unfortunately, one elderly woman, Leah Stern, was unable to escape the fast moving waters, and went missing.

Rabbi Joel Gold a chaplain with the Delaware Sheriff Department tells CatskillScoop.com that rescue crews from fire departments in Broome County were called to assist with searching for her.

According to eyewitnesses, the motel literally floated away in the raging waters.

Unfortunately, her body was located a short while ago by rescue personnel.

6pm: Added another Margaretville video to the bottom of this post: footage of a water rescue at the Cheese Barrel, taken by YouTube user byDavidFrance. You can see more of his videos here. Also added Arkville and Fleischmanns updates, with photos, below.

Photo of an inundated Freshtown by James Baker via Facebook:

2pm: Videographer Fred Margulies just sent us the above video of flooding in Margaretville.

12:15am: Photos and video of Margaretville flooding are emerging on Facebook, which means that some M-Ville residents still have power and internet. Here's a link to a video of Cheese Barrel and Bridge Street by Christian Scott. Here are photos by Megan Elizabeth VanKeuren below of the Freshtown/CVS parking lot:

11:20am: Margaretville's flooding is exceeding the levels set during the record-breaking 1996 flood, according to a hydrograph of current flooding levels. See the hydrograph below: 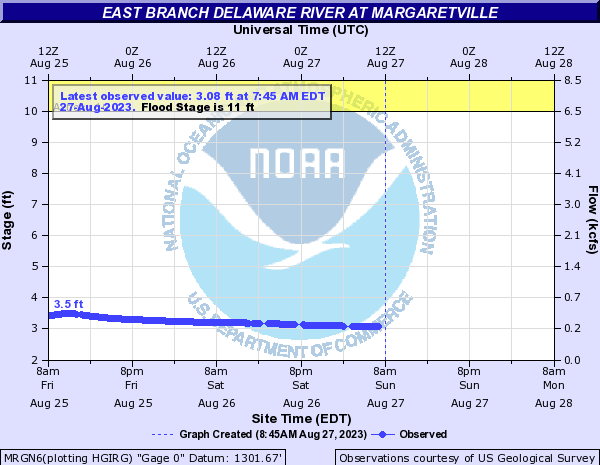 11:15am: Main Street Margaretville is covered with several feet of water. Margaretville Central School and the Margaretville Telephone Company are reportedly flooded. Governor Andrew Cuomo, who was on his way to New York City this morning after inspecting the Gilboa dam for earthquake damage, stopped in Margaretville to inspect flood damage. His team released the above photos on his Twitter account, which you can see here. Below, Cuomo in Margaretville:

10:30am: The Town of Middletown is under a state of emergency, as of 9:05 am on Sunday, August 28. From a press release from Delaware County:

By order of the Town of Supervisor the Town of Middletown, Delaware County, NY has declared a State of Emergency effective immediately. All travel is restricted to emergency personnel and essential employees. Do not attempt to cross flooded roadways or downed power lines. Please report any flooded roads, downed trees or power lines to the Delaware County Emergency Operations Center at 607-746-9600.

An emergency shelter has been established at the Belleayre Ski Center in Shandaken. For more information, call 845-254-5600.

Delaware County is under a county-wide travel advisory, as of 9:15am. From the Sheriff's Office:

Heavy overnight rain and wind in expected to continue throughout the afternoon which has caused driving conditions and some roadways to become hazardous.

All unnecessary travel is discouraged.

5:45pm: Photos of flooded Rte. 28 through Arkville by Arkville Bread and Breakfast on Facebook:

More photos of Arkville devastation by James Baker via Facebook:

Earlier: Reports are coming in via Facebook that several homes in the trailer park have washed away. Evacuations began Sunday morning.

Just saw the emergency vehicle headed towards Arkville with a boat in tow. 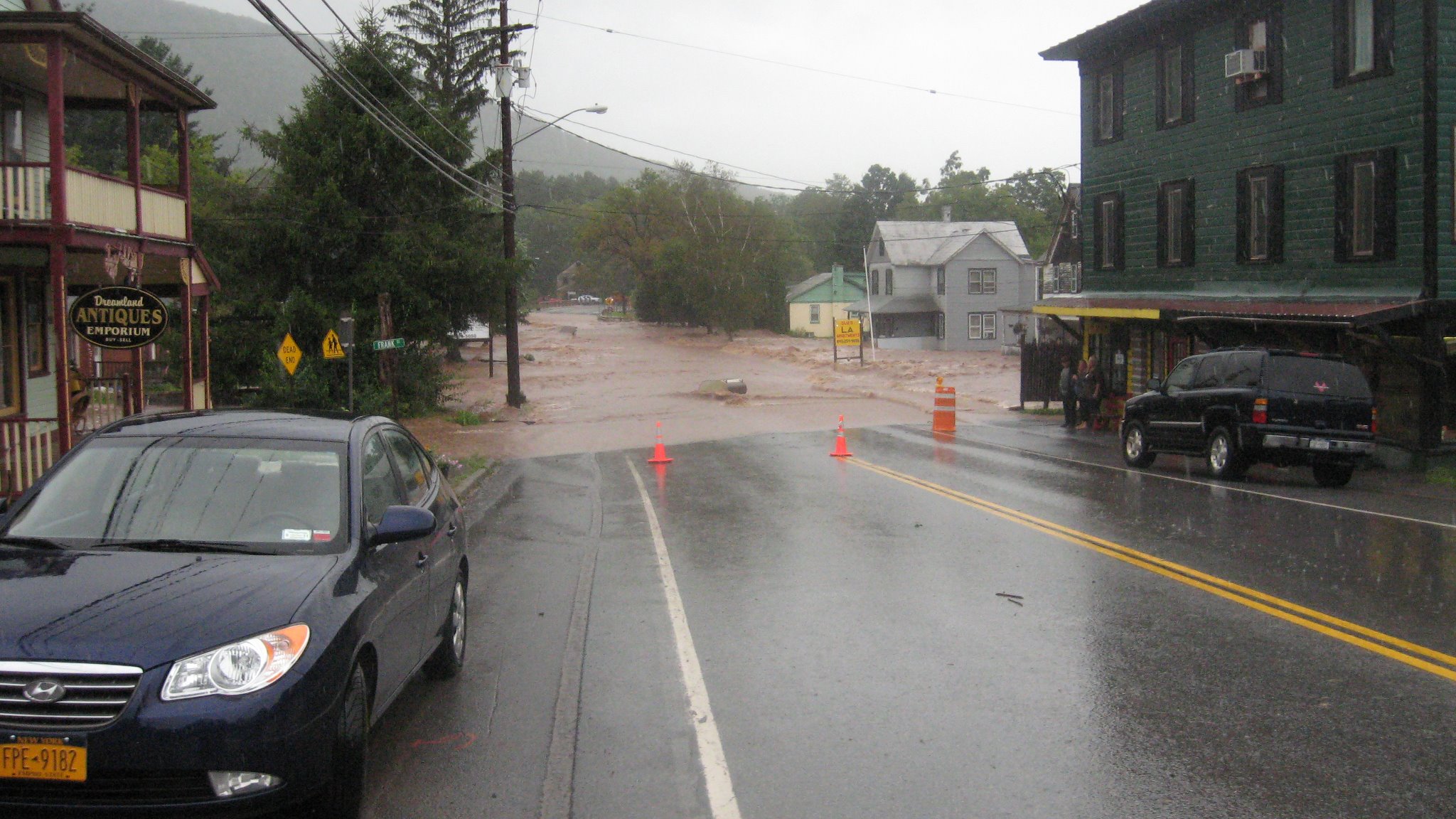 Evacuations are underway. From Joe Moskowitz (who took the photo above) via Facebook:

Flooding and evacuations underway in Arkville. Fire Hall (for people and some pets) and our parking lot for vehicles are being used. Several homes below the tracks, on the streamside of Route 28 are surrounded by deepening water. This is a bad one.

5:45pm: Judy Sugar, who was trapped in a house on Wagner Avenue in Fleischmanns this afternoon, send us photos and video. Her report: 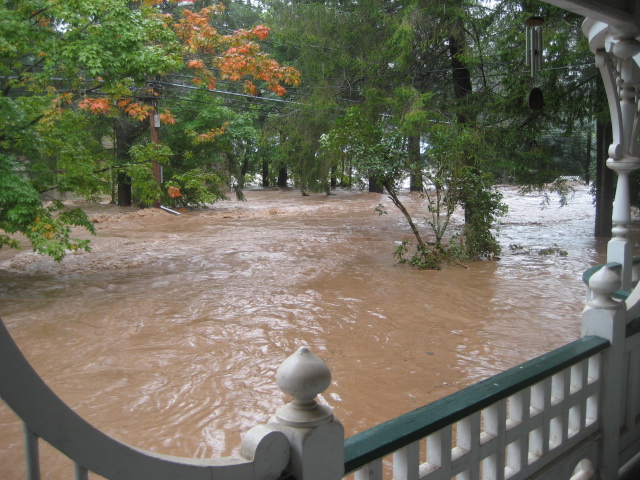 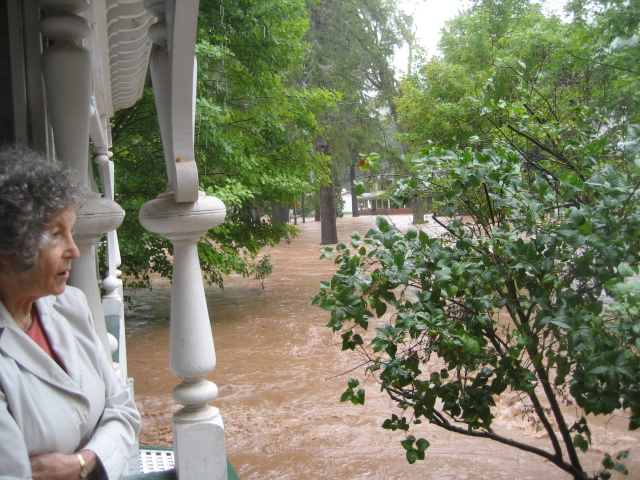 We are trapped on 91 Wagner ave, Fleischmanns where the avenue is the fricken missisipi!Cars swept away at 25mph propane/ oil taanks stairs to the house gone.We have seen no one here since 7am when the volunteer told us to drive just b4 the car carried away. Worries bout others in Fleischmanns.(??) Smell gas and subur prp says dial 911

Email: IT IS FLOODING LIKE NOTHING EVER SEEN IN FLEISCHMANNS. IT ALMOST SEEMS THAT NO ONE KNOWS WHAT IS GOING ON HERE. WE ARE STRANDED AND THE STREET IS A VAST RIVER WASHING CARS DOWN AND DEBRIS AT 25 MPH. WE HAVE SEEN NO ONE SINCE 7 AM WHEN A VOLUNTEER TOLD US TO GET IN OUR CAR FIFTEEN MINUTES BEFORE IT WAS CARRIED AWAY DOWN WAGNER. CARS WASHING INTO THE HOUSE TABLES OIL AND PROPANE TANKS. SUBURBAN PROPANE SAYS DIAL 911 WHEN WE ASKED FOR HELP SMELLING GAS. ENCLOSED PHOTOS-JUDY SUGAR"

1pm: First photos of flooding coming out of Fleischmanns, thanks to Winifred Zubin, who has posted an entire album on Google. One photo is of a car completely submerged by floodwaters on Upper Wagner Bridge at 9am:

Another photo is reportedly of the Valkarian Motel floating in Vly Creek: 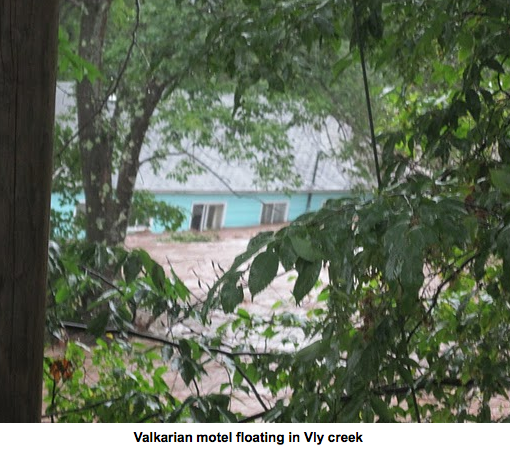 11:00am: Evacuations are underway in the village as of Sunday morning. We hear that swiftwater boats have been called in, and are having trouble responding.

From a reader report on our liveblog, 9:23am:

Del. County 911 Looking for *any* swift water rescue/tech rescue to report to Fleischmanns

8:45am: Just heard on the Delaware County 911 scanner that the village of Fleischmanns in Delaware County is being evacuated. We received a report about an hour ago that people were trapped by floodwaters on Wagner Avenue as well.