"The little beating heart of the town": Uncle Rock throws a benefit for the Phoenicia Library 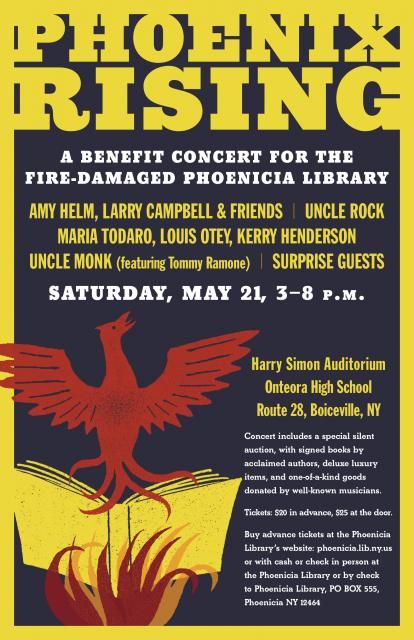 Uncle Rock, the rockstar alterego of Phoenicia resident Robert Warren, played some of his first shows at the Phoenicia Library. It's not suprising that in the library's hour of need, he wants to give back.

Uncle Rock: Photo by Franco VogtWarren and his wife, Holly George-Warren, are organizing “Phoenix Rising,” a rollicking fundraiser being held at Onteora School this Saturday, with all proceeds to benefit the Phoenicia Library. Fire ravaged the library in March, destroying all the books, the furniture, and much of a one-of-a-kind collection of trout fishing ephemera.

In April, Judith Singer, the president of the board of the Phoenicia Library, told the Shandaken Town Board that the library needed to raise $116,000 in order to re-open permanently.

And the community has responded. A slew of benefits for the library have been organized: a bake-off last weekend at Mama’s Boy, a community yard sale in Chichester this Saturday, a silent art auction on May 28 at the Emerson, a musical benefit at the Shandaken Theatrical Society on June 25, and more. (There's a complete list of benefits on the library's website.)

This weekend's concert is perhaps the most star-studded. Uncle Rock will be playing, as will Amy Helm, Larry Campbell, Teresa Williams, Byron Isaacs, Uncle Monk, Tommy Ramone, Claudia Tiernan, and the world-class opera singers who founded the Phoenicia Festival of the Voice: Maria Todaro, Louis Otey, and Kerry Henderson. There will also be a silent auction featuring tickets to Mountain Jam, signed books and CDs from the likes of Jonathan Franzen, Martha Frankel and Steve Earle, and gift certificates from local restaurants.

How does a small public library get so much love? We talked with Warren about his memories of the Phoenicia Library and his goals for the fundraiser.

Q: What did you think when you first heard that the Phoenicia Library had burned down?

A: I was in despair. The library is the closest thing we have to a community center in Phoenica. It’s a meeting place, and the people who work there are just wonderful, quirky, funny -- I’ve told people that it’s like walking into a sitcom. You couldn’t cast a more different, yet complementary, group of people. You have people grew up here, you have people who migrated here, you have Buddhists and you also have old hippies. Everyone was welcome there regardless of who they were or their political beliefs or their sexual orientation or whether you had a dog or not. You could take your dog -- they were big into dogs. They always had a big jar of doggie biscuits next to where you return your books.

Q: Do you have any memories of the trout collection on the second floor which was destroyed in the fire?

A: It was like a lounge. You’d go up there and there were these fish on the walls, but also all of these exotic flies that had been tied and were encased in glass, and fishing poles. I’m not really a fisherman -- I’m not a fisherman at all -- but it was always a very distinctive part of the character of the library. There’s no other library ever that you’re going to walk into that would have the angler’s parlor. It just lent a real genuine character to the whole thing that cannot be manufactured.

Q: It’s been a rough year for Phoenicia, hasn’t it?

A: Walking though Phoenicia right now, you have Sweet Sue’s closed on one side of the street, and the library on the other side with fire damage. The library was the heart of the arts community, and of the region. Old-timers go there, and kids can get off the bus there and wait there for their parents to come pick them up. It’s one of those things that cuts across all boundaries. There are townspeople who would just hang out there for hours every day. Now these guys have nowhere to go. Luckily it’s springtime, and they just sit outside. You know, it’s like the pickle barrel -- where everyone gathers. That’s what the Phoenicia library has been for us. It’s the little beating heart of the town.

Phoenix Rising Benefit Concert, Saturday, May 21, 3pm to 8pm, Harry Simon Theater, Onteora High School, Route 28, Boiceville, NY. Tickets $20 in advance, $25 at the door. Children under six free. Tickets available on the library’s website, at the library itself at 9 Ava Maria Drive, Phoenicia, or via mail to Phoenicia Library, PO BOX 555, Phoenicia NY 12464. Tax-deductible donations can also be made the same way.